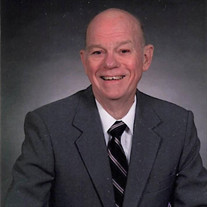 Gene Arnold Walker was born August 13, 1931 in Birmingham, AL the son of the late Curtis Dewey and Clara Bell Watkins Walker. In addition to his parents, Mr. Walker was preceded in death by a brother, Daniel Walker, and a sister, Sue (Walker) Bearden. He was united in marriage to Patricia Ann (Pat) Bowen on December 26, 1955. Mr. Walker served his country honorably in the United States Air Force and the Alabama Air National Guard. After being discharged he attended Auburn University, graduating with a degree in Electrical Engineering. He was hired by the Tennessee Valley Authority as an Electrical Engineer and worked there for 35 years before retiring. Mr. Walker volunteered as a Boy Scout leader for Selmer Troop 32, and was recognized for his service with the Silver Beaver Award. He and his wife also participated in the Senior Olympics for several years, focusing on swimming, track and field events and winning many medals along the way. Mr. Walker was a member of Selmer First United Methodist Church. Mr. Walker departed this life on December 24, 2021 in Selmer, Tennessee at the age of 90. He is survived by his wife of 66 years, Patricia B. (Pat) Walker of Selmer, TN; three daughters: Alison W. Bennett and husband Paul of Franklin, TN, Debbie Lynn Walker of Smyrna, TN, and Cindy Jeanne Walker of Selmer, TN; a son, Gene Alan Walker of Hermitage, TN; two grandchildren, Sarah (Bennett) Campbell and husband Michael of Smyrna, TN and Andrew Douglas Bennett and wife Megan of Louisville, KY; two great-grandchildren, Brooklynn Campbell and Dakota Campbell; a brother, John Walker and wife Diane of Eads, TN; and many extended family and friends. Memorial contributions may be made to First United Methodist Church of Selmer, TN. Private Graveside Services were held on December 31, 2021 at 10:00 AM at Lake Hill Memorial Gardens in Bethel Springs, Tennessee, with Joe Loncar officiating. Burial followed in the Lake Hill Memorial Gardens at Bethel Springs, Tennessee.

Gene Arnold Walker was born August 13, 1931 in Birmingham, AL the son of the late Curtis Dewey and Clara Bell Watkins Walker. In addition to his parents, Mr. Walker was preceded in death by a brother, Daniel Walker, and a sister, Sue (Walker)... View Obituary & Service Information

The family of Gene Arnold Walker of Selmer, TN created this Life Tributes page to make it easy to share your memories.