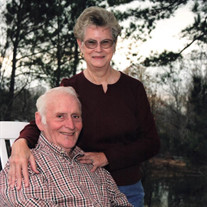 Gerald Thaddus Kennedy was born on June 8, 1938, the youngest child of the late Lem and Myrtle Leatherwood Kennedy. With the exception of a short stay in Peoria, Illinois, with his parents, he lived most of his life in Ramer, and graduated from Ramer High School. Shelby Jean Davis was born on January 6, 1940, the daughter of the late Alfred and Faye Christopher Davis. She grew up living in various locals in the north and east part of McNairy County. Shelby was a graduate of Adamsville High School. Gerald and Shelby were married on June 29, 1958 in Corinth, Mississippi. On June 29th of this year, they would have celebrated their 62nd anniversary. They lived their entire married lives in McNairy County, Tennessee, except for a very brief stay in Montgomery, Alabama. Gerald and Shelby died on June 15, 2020, as a result of injuries sustained in an automobile accident. Gerald was 82 and Shelby was 80. Gerald and Shelby were active and faithful members of the Cypress Tank Church of Christ, where Gerald served as an elder, teacher and song leader, and Shelby served as treasurer and teacher. For many years, until Covid 19, they would go to the nursing home each month to sing, visit and provide refreshments to the residents. Gerald and Shelby enjoyed bluegrass music, camping, yard sales and, most of all, spending time with their family and many friends. They were wonderful parents, grandparents and great-grandparents, who attended many ballgames and other school activities in support of their sons, grandchildren and great-grandchildren. They loved, and were loved by, their family. Gerald and Shelby are survived by their sons, Craig (Lisa), Stacy (Tami) and Wade, seven grandchildren, Nikki (Jay) Kirk, Josh Lackey, Courtney (Josh) Henson, Kasey Kennedy, Corbin Kennedy, Caleb Kennedy and Carson (Mayson) Kennedy, and five great-grandchildren, Cole Kirk, Maddie Kirk, Grayson Henson, Kennedy Henson and Adley Kate Henson. Shelby is also survived by three sisters, Margaret Scott, Betty Duck and Peggy Lard. They are also survived by numerous nieces and nephews. In addition to their parents, Gerald and Shelby were also predeceased by a daughter-in-law, Frances. Gerald was also predeceased by a brother, Aaron, and two sisters, Opal Kirk and Jewell Clayton. Shelby was also predeceased by three sisters, Dorothy Tedford, Marylene Kopp and Virginia Davis, and two infant brothers, as well as a niece and nephew. Memorials may be made to Cypress Tank Church of Christ Acct., c/o Home Banking Company P.O. Box 247, Selmer, TN 38375.

Gerald Thaddus Kennedy was born on June 8, 1938, the youngest child of the late Lem and Myrtle Leatherwood Kennedy. With the exception of a short stay in Peoria, Illinois, with his parents, he lived most of his life in Ramer, and graduated... View Obituary & Service Information

The family of Gerald Thaddus Kennedy created this Life Tributes page to make it easy to share your memories.

Send flowers to the Kennedy family.