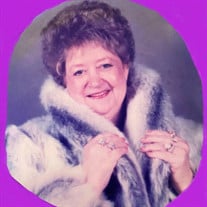 GERALDINE NEISLER JONES Henderson, TN: Geraldine Neisler Jones age 80, passed away March 28, 2022 at her home. She was born July 3, 1941 in Lexington, TN, daughter of the late James David and Beulah Chandler Neisler. She grew up in the Center Hill Community and went to school in Scotts Hill, TN. She married Coy Jones on June 28, 1958 and they made their home in Henderson. They enjoyed 63 years of marriage together. She was a member of the Henderson Church of God. Geraldine was a trailblazer for women in volunteer leadership in Christian ministry. She worked alongside her husband as he pastored churches and she also did radio ministry and wrote weekly articles for the Jackson Sun. She also did volunteer work for the American Heart Association, was an officer with the American Legion in Henderson for many years, as a Troop Leader for the Cub Scouts in addition she participated in many other volunteer projects. She was also a singer/songwriter and a published poet. Her primary work was as a wife and homemaker and mother of five children. In addition, she took in many others who were in need over the years. It has been said of Geraldine many times that she “loved the unlovely.” She loved her children and grandchildren and leaves them an excellent legacy of love and service to God and others. Mrs. Jones is survived by her husband Coy Glen Jones of Henderson; four daughters, Rita Weaver (Ricky) of Finger, Sarah McEarl (Bobby) of Henderson, Melody Hannah (Brian) of Henderson and Destiny Kincaid of Henderson; 15 grandchildren; seventeen great grandchildren; two brothers, Gordon Neisler and James Paul Neisler both of Lexington; three sisters, Diane Jones of Decaturville, Janie Cohea of Henderson and Marlene Austin of Bethel Springs. She was preceded in death by her parents, a son, Marty Jones in 2018; a sister, Bonnie Maness, a brother, Raymond Neisler and a granddaughter, Alyssa Faith. Funeral services will be 2:00 PM Friday, April 1st at Shackelford Funeral Directors – Crook Avenue Chapel with Bro. David Baggett and Marlene Austin officiating. Burial will follow in Center Hill Cemetery at Reagan, TN. The family will receive friends at Crook Avenue 5:00 PM until 8:00 PM on Thursday and 12 Noon until 2:00 PM Friday service time. Shackelford Funeral Directors of Henderson 731-989-2421

GERALDINE NEISLER JONES Henderson, TN: Geraldine Neisler Jones age 80, passed away March 28, 2022 at her home. She was born July 3, 1941 in Lexington, TN, daughter of the late James David and Beulah Chandler Neisler. She grew up in the Center... View Obituary & Service Information

The family of Geraldine Neisler Jones of Henderson created this Life Tributes page to make it easy to share your memories.