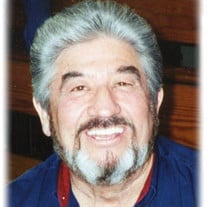 Harold Gene Wallace was born March 14, 1939 in Cerro Gordo, TN the son of the late Dewey Samuel and Alta Pauline Bromley Wallace. Mr. Wallace proudly served his country in the United States Army for six years and was a Baptist Minister preaching for many congregations when he was able and preaching on his radio show in Parsons, TN. He worked for the Tennessee State Prison System in Only, TN for nine years and retired from Clifton Water Management Services. Mr. Wallace departed this life at his daughters home on May 17, 2021 at the age of 82 Years, 2 Months and 3 Days. He is survived by daughters, Robin Daniel and David of Iron City, TN; Kimberly Heard of Foley, AL; two brothers, Terry and Jimmy Wallace; grandchildren, Jordan and, Tonya Martin, Kaden and, Bailie Heard; Services will be held on May 21, 2021 at 1:00 PM at Shackelford Funeral Directors at Collinwood in Collinwood, Tennessee, with Brant Sanders officiating. Burial will follow at 3:30 pm on Friday May 21 at Kelly Cemetery at Bath Springs , Tennessee Visitation will be held May 21, from 10:00 am till 1:00 pm at Shackelford Funeral Directors in Collinwood, TN. with Shackelford Funeral Directors assisting the family. Pallbearers include Marc Garrett, Kayden Heard, Terry Paul Wallace Jr., Kevin Heard, Phillip Martin and Chris Herzig

The family of Harold Gene Wallace created this Life Tributes page to make it easy to share your memories.

Send flowers to the Wallace family.