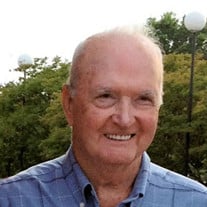 HERMAN ‘BOBBY’ GREER Beech Bluff, TN: Herman Greer age 86, passed away March 3, 2021 at Jackson Madison County General Hospital. He was born February 9, 1935 in Pinson Fork, Kentucky, the son of the late Oscar Herman and Pearl Lena Compton Greer. He graduated from Belfry High School in 1954 and joined the U.S. Air Force right after High School. While in the Air force he met his bride to be, Gladys L. Funk at Eglin Air Force Base in Florida. They were discharged together, came home together and were married in 1958. They made their home in Fairless Hills, PA for abut sixteen years where he worked for Boise Cascade (now Sonoco) as a maintenance supervisor. He was transferred to a new plant in Jackson in 1974 where he worked until his retirement in April of 1996. They made their home in the Five Points Community since 1974. He was a Baptist in Belief. He was always willing to lend a helping hand to his neighbors, friends and his community. An avid gardener, he enjoyed sharing his harvest with everyone. He also enjoyed hunting and fishing. He liked spending time with his Schnauzer Dog, Ollie. He spent his leisure time on his front porch watching the hummingbirds at his feeders. Mr. Greer is survived by three daughters, Bonnie Greer Clark of Cordova, Charlene Davis (Jeff) of Jackson and Dena Leonard (Mason) of Jackson; four grandchildren, Megan Matlock (Zak), AnnaBeth Cornelison, Matt Davis and Trey Leonard and two great grandchildren, Adelyn Cornelison and Cameron Matlock and a brother, Rudy Compton of Pikeville, KY. He was preceded in death by his parents; his wife, Gladys L. Greer on March 30, 2020, after sixty-two years of marriage and a sister, Virginia Greer Dye. Funeral services will be 11:00 AM Monday, March 8th at Shackelford Funeral Directors – Crook Avenue with Bill Smith officiating. Burial will follow in Big Springs Cemetery. The family will receive friends at Crook Avenue 2:00 PM until 5:00 PM on Sunday. Shackelford Funeral Directors of Henderson 731-989-2421

The family of Herman "Bobby" Greer of Beech Bluff, TN created this Life Tributes page to make it easy to share your memories.

Send flowers to the Greer family.