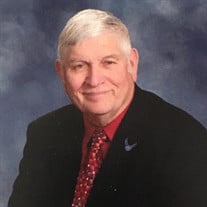 Homer "PopPop" Watson departed this life on Friday, August 14, 2020, at the age of 74 years and 20 days. He was born in Old Hickory, Tennessee on July 25, 1946, the son of the late Homer A. Watson, Sr. and Jane Dale Watson Pyron. On June 29, 1969, he was united in marriage to Jackolyn "Jackie" Watson, who survives. Homer loved his country and served honorably in the United States Air Force. He was a true patriot, loved his guns and history, and did his due diligence to buy only American made items. He loved his family and was a great husband, father, grandfather, great grandfather, and friend. Homer was a servant and his actions were Christ-like. He was a member of the Savannah Church of Christ, where he served as a deacon, was part of the security team, which he took great pride in, and he would faithfully clean the baptistry until he wasn't physically able. He was also a member of the American Legion and a lifetime member of the NRA. His sense of humor was one of a kind. He could come out with one liners that would cause you to explode with laughter. From his famous qoutes,"I have aids, but I can turn them on and off" to his,"Lady, you shouldn't be in the less than twenty items line because there's more than twenty peas in that bag." You just never knew what he would come up with. He was frugal in that he kept everything because he said,"You never know when you might need it." (Matt is sure there is a secret room in our house full of empty coffee cans!) Homer was a true handyman. He could fix anything and usually involved duct tape, only it had to be real duct tape from ACE Hardware. He could forget anything, especially where he had put something. But he could tell you what size screw would work in anything. Homer loved sweets and would sneak them anytime he could get away with it. He never complained even though there were many times he could have. In addition to his wife of 51 years, Jackolyn "Jackie" Watson of Savannah, Tennessee, Homer is survived by his children, Matthew Watson of Savannah, Tennessee and Jenny Watson Lloyd, and her husband Richard, of Lebanon, Tennessee; grandchildren, Mary Elizabeth Watson, Emma Jade Watson, Everhett Lloyd, Jarod Lloyd, Daniel Lloyd, Caden Lloyd, and Isaac Lloyd; great grandchildren, Christopher Matthew Champagne and Codi Elizabeth Champagne; stepbrother, Mike Pyron of Jackson, Tennessee; stepsister, Lynn Pyron Bowie of Memphis, Tennessee; and brother-in-law, Herb Stewart of Adamsville, Tennessee. Along with his parents, Homer was preceded in death by a grandson, Noah Riley Mitchell, and sisters, Tanya Watson Stewart and Alice Raye Watson. To know Homer was to love him. Remember him with a smile or a funny story.

The family of Homer "PopPop" Watson created this Life Tributes page to make it easy to share your memories.

Send flowers to the Watson family.