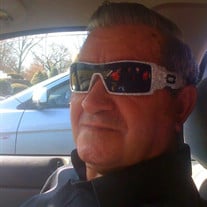 Jack Alexander departed this life on Tuesday, December 22, 2020, at the age of 84 years and 17 days. He was born in Hardin County, Tennessee on December 5, 1936, the son of the late Edward, Sr. and Myrtle Arlene Seaton Alexander. On November 4, 1994, he was united in marriage to Faye Short Taylor, who survives. Jack had served his country honorably in the US Army. He was the former Pastor of Philadelphia Church of the Nazarene in Chuckey, Tennessee and was a member of the Morris Chapel Baptist Church. He had also worked for Aqua Glass and the Wise Company for 13 years, where he was a custodian. Jack loved his family and get togethers, he enjoyed yard work, and he especially loved to preach and talk about the Lord. He is survived by his wife, Faye Taylor Alexander of Morris Chapel, Tennessee; daughter, Alonda Jennings and her husband Thomas of East Tennessee; stepsons, Keith Taylor and his wife Susan of Savannah, Tennessee, and Chris Taylor and his wife Jennifer of Crump, Tennessee; stepdaughter, Angela Tacker and her husband Earl of Stantonville, Tennessee; daughter-in-law, Erica Alexander of East Tennessee; brother, Ed Alexander and wife Ronda of Adamsville, Tennessee; sisters, Mary Stewart of Savannah, Tennessee and Laura Smith of Alabama; grandchildren, Gabriella Alexander and Haley Alexander; step grandchildren, Brian Jennings, Andrea Jennings, Tim Taylor and his wife Leah, Blake Russell, Breann Hoseney and her husband Josh, Nick Taylor and his wife Karen, Ashley Taylor, Kelsey Kelley, and Tyler Kelley; and eight great grandchildren. In addition to his parents, Jack was preceded in death by his son, Scott Alexander; brothers, Kenneth Douglas Alexander and Jim Alexander; and a sister, Willie Carter.

Jack Alexander departed this life on Tuesday, December 22, 2020, at the age of 84 years and 17 days. He was born in Hardin County, Tennessee on December 5, 1936, the son of the late Edward, Sr. and Myrtle Arlene Seaton Alexander. On November... View Obituary & Service Information

The family of Bro. Jack Alexander created this Life Tributes page to make it easy to share your memories.

Send flowers to the Alexander family.