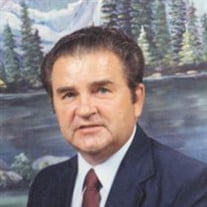 JESSE HULON PATTERSON Jackson, TN: Jesse Hulon Patterson, age 93, passed away January 20, 2022 at North Mississippi Medical Center at Tupelo, MS. He was born March 20, 1928 in the Hickory Corner Community of Chester County, the son of the late Buford Otto and Flossie Marie Maness Patterson. He went to school at Hickory Corner and on to Mississippi College in Clanton, MS. He married Faye Murley of Chester County in 1947. They lived in Memphis for eight years, Newton and Clinton, MS and then in LA where Hulon started his preaching ministry in 1955. They moved back to TN in 1964 and he continued to preach until December 2018. He also was a part of the Union University community, making several great friends there, while working in the maintenance department. He loved fishing, softball and baseball, especially the Atlanta Braves. Mr. Patterson is survived by three sons, Harold Patterson (Suzann) of Blue Springs, MS, Steve Patterson (Joy) of Thompson Station, TN and Rodney Patterson (Amye) of Bartlett, TN. Papaw, as he is fondly known as, is also survived by nine grandchildren and eight great grandchildren. He is also survived by two sisters, Thelma Justice of Clarksville, TN and Bonnie Howard of Brighton, MI. He was preceded in death by his parents, his wife, Faye Murley Patterson (2017), two sons, Danny Patterson (2018) and Gary Patterson (2005). Also preceding him in death were three brothers, Melburn, Freelon and Fred Patterson, as well as three sisters, Jada, Louise and Ruby Patterson. Funeral services will be 2:00 PM Sunday, with visitation starting at noon. Both the visitation and funeral will be held at Shackelford Funeral Directors on Crook Avenue in Henderson, TN with Larry Eddings officiating and music provided by Bro. John Norvall. Burial will follow in Bethel Cemetery in Henderson. Shackelford Funeral Directors of Henderson 731-989-2421

The family of Jesse Hulon Patterson created this Life Tributes page to make it easy to share your memories.

Send flowers to the Patterson family.