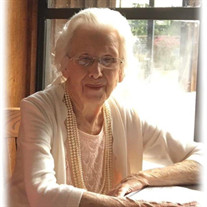 Jessie Fisher was born on March 29, 1927 in Savannah, Tennessee, the daughter of the late Roy C. and Nollie Faulkner Brown. On April 19, 1948, she was united in marriage to Roy G. Fisher, who preceded his wife in death on June 20, 2011. "Mrs. Jessie", as she was known by many, worked as the owner of a general store prior to her retirement and previously lived in Nashville, Tennessee where she worked for the State of Tennessee government. She was a member of First Baptist Church in Savannah, Tennessee and loved her church. She was a dedicated wife, mother, and Christian. "Mrs. Jessie" loved her family and tending to her flowers. Jessie Fisher departed this life on May 19, 2022 in Savannah, Tennessee at the age of 95 years, 1 month, and 20 days. She is survived by her daughter, Kathy Powell of Apollo Beach, Florida; grandchildren, Courtney Lehmann and Nick Lehmann; and great grandchild, Lana Lehmann. In addition to her parents and husband, Jessie was preceded in death by her brother, RC Brown, Jr.; sisters, Verlon Brown Shelby, Virginia Brown Martin, and Shirley Brown Anderson; father in law, Roy G. Fisher, Sr.; mother in law, Mary Lee Fisher; sisters in law, Artie Fisher Pate and Geneva Fisher Byles; and brother in law, Roy Gilbert Fisher.

The family of Jessie Fisher "Mrs. Jessie" created this Life Tributes page to make it easy to share your memories.

Send flowers to the Fisher family.