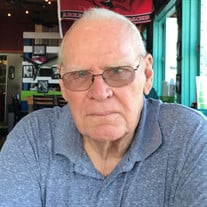 Mr. Joe Franklin, age 81, of Middleton, TN, passed away Thursday morning, August 26th, at Jackson-Madison County General Hospital. He was born in Norwich, CT to the late Amasa Filmore Franklin and Rita Eileen Peloquin Franklin. He was also preceded in death by his son, Brady A. Franklin; and a brother, William W. Franklin. United in marriage to Elizabeth "Judy" Ormsby on July 14, 1971, he was retired from Northwest Airlines (now, Delta) following 28 years of employment. He had lived in California, Phoenix, Detroit and Moscow, TN before moving to Hardeman County. The Franklins lived in Hornsby for eight years and at Rogers Springs Lake near Middleton for the last 20. He also drove a truck out of Selmer for a few years. A Catholic in faith, Mr. Franklin enjoyed being near the water. He was a diving instructor and formerly certified other divers in the waters near Grand Cayman Islands. He served in the US Army from 1959-61. In addition to his wife of 50 years, he leaves four nieces, Debbie Dembecki of San Jose, CA, Darlene Williamson of Florida, Bridget Ormsby of Phoenix, AZ and Ashli Alexander of Gardner, NY; and a brother-in-law, Tom Ormsby of Palm Desert, CA. Memorials may be sent to Hardeman Adoptable Animals. https://www.hardemanadoptableanimals.org/donate/

The family of Joe Franklin of Middleton, TN created this Life Tributes page to make it easy to share your memories.

Send flowers to the Franklin family.