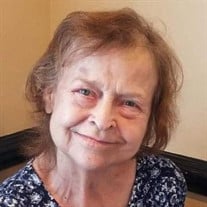 Judy Ledbetter Glover, age 78, resident of Finger, Tennessee, went to her heavenly home on February 25, 2021. She had suffered from Alzheimer's for nearly twelve years. Her husband of 58 years, Thomas Glover, lovingly cared for her in their home. Judy was born August 17, 1942, in Memphis, Tennessee to the late James Evans Ledbetter II and the late Mary Frances Stewart Ledbetter. Judy graduated from Messick High School and was later married to Thomas Glover August 18th, 1962. She began her career in Memphis, Tennessee, as a switchboard operator for Bell South and retired as a framer after working there over 30 years. She continued working after relocating to Finger, Tennessee, as a call center representative at Jackson Madison County General Hospital. She enjoyed reading, birdwatching, sewing, and traveling. She also loved spending time with her grandchildren. In addition to her husband, Judy is survived by her daughter, Marilyn Stout, and husband Scott; three grandchildren; five great-grandchildren; a sister, June Clarkson and husband Don; and a brother, Jim Ledbetter and wife Bobby. Funeral Services will be held for Mrs. Glover at 2:00 PM Monday, March 1, 2021, at Mt. Gilead Baptist Church in Bethel Springs, Tennessee. Interment will follow at Mt. Gilead Cemetery. Family and friends’ visitation for Mrs. Glover will be from 3 PM until 5 PM Sunday, February 28, 2021, at Shackelford Funeral Directors in Selmer, Tennessee. Pastor Mark LaRue will speak at the funeral. Those honored to serve as pallbearers will be Scotty Stout, Nathan Stout, Patrick Parker, Michael Hastings, Holden Hastings, and Bobby Yarbrough. Memorials may be made to www.projectspecialspaces.com.

Judy Ledbetter Glover, age 78, resident of Finger, Tennessee, went to her heavenly home on February 25, 2021. She had suffered from Alzheimer's for nearly twelve years. Her husband of 58 years, Thomas Glover, lovingly cared for her in their... View Obituary & Service Information

The family of Judy Ledbetter Glover created this Life Tributes page to make it easy to share your memories.

Send flowers to the Glover family.