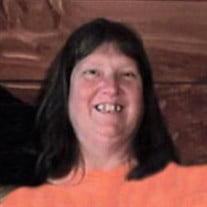 Karon Roach Jones was born November 30, 1967, in Ft. Hood, TX the daughter of Loretta Vardell Roach and the late John Roach. She was united in marriage to Mark Jones on November 28, 1987. Mrs. Jones graduated from Puxico High School in 1986. Her hobby was helping and serving others which brought her great joy. She was active in her church, Adamsville First Baptist, helping with the youth group, VBS, and the nursery. A "band Mom" for several years at Adamsville High School, she helped with the concession stand and never missed a band competition. Her life was centered around her children and whatever they were involved in. She was a wonderful wife, mother, sister, and grandmother. Mrs. Jones legacy of faith, family, and serving others will live on through her daughters and grandsons. She departed this life on April 29, 2022, in Birmingham, Alabama surrounded by her family at the age of 54 Years, 4 Months, 30 Days. She is survived by her husband, Mark Jones of Selmer, TN; four daughters, Kristal Kinkead and husband Tyler of Jonesboro, AR, Allissa Jones of Murfreesboro, TN, Jessica Jones of Murfreesboro, TN, Montana Jones of Selmer, TN; mother, Loretta Roach of Puxico, MO; mother-in-law, Ruth Jones of Campbell Hill, IL; four sisters, Loretta Gerecke and husband Doug of Dexter, MO, Elizabeth Killmer and husband Rick of Pittsburg, KS, Alice Stevenson and husband Rodney of Tuckerman, AR, (twin sister) Sharon Simmers and husband Gary of Advance, MO; two grandsons, Preston Allyn and John-Mark Kinkead; and a host of extended family and friends. In addition to her father, Mrs. Jones was preceded in death by a son, Dillon Allen Jones; a brother, John (Butch) Roach; two sisters, Lucetria and Dorothy Jean Roach;

Karon Roach Jones was born November 30, 1967, in Ft. Hood, TX the daughter of Loretta Vardell Roach and the late John Roach. She was united in marriage to Mark Jones on November 28, 1987. Mrs. Jones graduated from Puxico High School in 1986.... View Obituary & Service Information

The family of Karon Roach Jones of Selmer, Tennessee created this Life Tributes page to make it easy to share your memories.