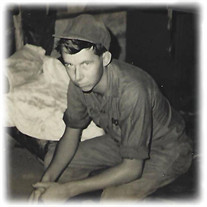 Larry E. Stricklin, of Savannah, passed peacefully into eternal rest on June 17, 2021 after an admirable earthly life of 73 years, 10 months, and 14 days. He was born on August 3, 1947; the seventh son of the late William T. And Beulah D. Stricklin. From a young age, he radiated creativity, good humor, devoutness, moral uprightness, and kindness. As a teenager, he did odd jobs for those in need around the community and worked at a local sawmill, gathering priceless skills and experience along the way. Drafted into the Army at age 19, he very proudly and heroically served our country in Vietnam until 1968. There he learned the skills of auto/truck and equipment mechanics, which would ultimately prove to be his chosen career. He traveled in the late 60s, working on general construction jobs. In May of 1971, he met his cherished wife, Linda, at Mug and Cone in Savannah. They went on their first date in late November and married in June, 1972. Also that year, he was hired by Douglas Blount Construction in Savannah. In the late 70s, Larry attended technical school in Crump where he obtained electrical certification. In 1980, he transitioned to Adkins Midtown Gulf, where he utilized the knowledge of mechanics and equipment repair gained during his time in Vietnam. As a young couple, Larry and Linda enjoyed boating and camping. He was an avid water-skier and bowler. One of their favorite pastimes was driving around together, exploring in their Jeep. They welcomed a daughter, Lindsey, in 1983. Out of all of the accomplishments and experiences in his life, she proved to be Larry’s most beloved gift. In 1991, he built his own auto repair shop from the ground up. It was simply called “Larry’s.” He loved working with and serving his community. His upbringing in Savannah heavily influenced his values and personality. He enjoyed hunting and fishing in his spare time. On his days off, he could often be found fishing from his boat on the river at Pickwick. He was known for packing the live well in a short amount of time with an overabundance of catfish. His largest white catfish catch was around 58 lbs. It took the majority of an afternoon to slowly reel that one in on a day when he was supposed to be resting, not fishing, due to his having pneumonia. Nevertheless, he persisted. He brought the big catch home for his family to see before promptly taking it back to the river and setting it free once again. Ever the fixer, his true passion was working on cars. He loved rebuilding antique cars and won many trophies with his 1929 Ford A-Model. He also rebuilt his wife Linda’s 1971 Plymouth Duster. His creativity flourished through carpentry, fixing equipment, and rebuilding cars. He always had a project to occupy his time. He enjoyed gardening and nature and spent many hours caring for and observing the wildlife around his farm. But his greatest loves in life were his family. Larry is survived by his cherished wife of 49 years, Linda, and his beloved daughter, Lindsey; his siblings Joe Stricklin, Barbara Melson, Jesse Stricklin, James Stricklin, Jack Stricklin, all of Savannah, and Mary Joyce Stricklin Gray-Hill of Corinth, MS; as well as many well-loved nieces, nephews, great nieces, great-nephews and dear friends.

Larry E. Stricklin, of Savannah, passed peacefully into eternal rest on June 17, 2021 after an admirable earthly life of 73 years, 10 months, and 14 days. He was born on August 3, 1947; the seventh son of the late William T. And Beulah... View Obituary & Service Information

The family of Larry Stricklin created this Life Tributes page to make it easy to share your memories.

Send flowers to the Stricklin family.