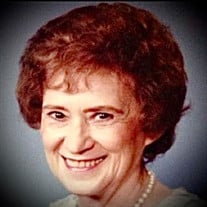 Mrs. Laura Baker departed this life on Sunday morning, January 16, 2022, at her home near Bolivar. She was born Wednesday, October 29, 1930, in Bolivar, daughter of the late Joe Nelson Shearon and Daisy Bell Keller Shearon and lived most of her life here. She was an account clerk at Western Mental Health Institute, retiring in 2010, after having worked there 40+ years, and was named the employee of the year in 2006, an award she was extremely proud of. She also had worked for the Tannery and Stallings Tractor Company. She married the love of her life, Wilbur Calvin Baker, on June 22, 1952, and they enjoyed 66 years together until his passing on July 28, 2018. They were a loving couple, exemplifying the term 'self-sacrificing love' towards each other and the children they raised together. Mrs. Baker had a passion for sewing, often seeing items in magazines and going home to make them. She made her family several articles of clothing including Halloween outfits, and even sewed her daughter's wedding gown. She also enjoyed being outside and working in her flowers. Mrs. Baker was a member of Parrans Chapel Baptist Church. Survivors include a daughter, Karen Baker Moore (Glen) of Bolivar; a son, Michael C. Baker of Bolivar; 6 grandchildren, Bryan Andrew Moore (Christina), Brianna Grace Moore (fiance', Peyton), Chasity Morgan Abbott (Logan), Faith Elizabeth Baker, Georgia Ivy (Gigi) Baker and Jake Eli Baker; and 3 great grandchildren, Ava Baker Moore, Jameson Evan Moore and Briggs Lane Abbott. The family wishes to thank and recognize her caregivers, Phyllis Simmons, Clara Crews, Tonya E. Blackwell, Pamela Coble, Patricia Wood and the late Bobby Jo Cheairs; and her Avalon Hospice nurses and caregivers, Doris Hobson and Caroline Henderson. In addition to her parents and her husband, she was preceded in death by two sisters, Gladys Porter and Jo Nell Sain; and a brother, Herman Keller (Bud) Shearon. Memorial contributions in her name may be sent to the charity of the donor's choice.

Mrs. Laura Baker departed this life on Sunday morning, January 16, 2022, at her home near Bolivar. She was born Wednesday, October 29, 1930, in Bolivar, daughter of the late Joe Nelson Shearon and Daisy Bell Keller Shearon and lived most... View Obituary & Service Information

The family of Laura Baker created this Life Tributes page to make it easy to share your memories.

Send flowers to the Baker family.