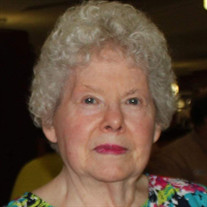 JANE MILLER Henderson, TN: Laura Jane Miller age 88 passed away January 11, 2021 at the Henderson Health & Rehabilitation Center. She was born July 17, 1932 in Henderson, the daughter of the late J.E. and Elizabeth Irene Anderson Williams. She grew up in West TN and Alabama. She graduated from Ridgely High School in 1950 in Ridgely, TN and graduated from Freed Hardeman College in 1952, David Lipscomb College in 1954, and then earned her Master’s in Library Science from George Peabody College in 1955. She began working as a Librarian at Freed Hardeman College in 1955, and during that year she married Charles Irvin Miller on August 18, 1956. They moved to Memphis in 1956 until 1969 where she worked at the Memphis Public Library from 1956 until 1959. She was a member of the Henderson Church of Christ. She was a stay at home mom while her children were young. The family moved back to Henderson January 1, 1970 and later that year she returned to F.H.C. as Librarian Assistant, then two years later was Library Director, a role she kept for twenty-eight years, retiring in 1997. She really enjoyed working with the F.H.U. Associates and was an active fan of the F.H.U. basketball and volleyball programs, as well as the Chester County High School basketball games. She was an U.T. Vols fan. She and her husband enjoyed traveling and made several international trips. She also loved spending time with her grandchildren ad great grandchildren and supported their various games and events. Mrs. Miller is survived by two daughters, Lisa Beene (Sammy) of Henderson and Cheryl Gary (Michael) of Owens Crossroads, AL; five grandchildren, Andrew Gary (Julia), James Ryan Gary, Rachel Riley (Ben), Jacob Beene and Lauren White (Blake) and four great grandchildren, Ava Gary, Jenna Gary, Sara Gary and Brayden White; two brothers, Joe Williams of Amory, MS and Jack Williams of Brownsville, TN. She was preceded in death by her parents, her husband, and a brother, David Williams and a sister, Betty Rickard. Funeral services will be 11:00 AM Friday at Shackelford Funeral Directors – Crook Avenue with Roy Sharp and Milton Sewell officiating. Burial will follow in Henderson City Cemetery. The family will receive friends at Crook Avenue 6:00 PM until 8:00 PM on Thursday and beginning at 10:00 AM on Friday. In lieu of flowers, donations may be made to the J.E. Williams Scholarship Fund at F.H.U. The family requests that facial coverings be worn and mindfulness of social distancing be practiced. Shackelford Funeral Directors of Henderson 731-989-2421

The family of Mrs. Laura Jane Miller - Henderson created this Life Tributes page to make it easy to share your memories.

Send flowers to the Miller family.