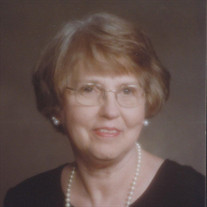 On Monday April 5, 2021, Linda Feeley Barber, loving wife and mother passed away at the age of 81. Linda was born on February 9, 1940 in Baltimore, Maryland to Bertram and Betty Rouse. Linda had a passion for learning and teaching. She received her BS in Nursing from the College of Saint Teresa's in Kansas City, Missouri. She earned a Masters in Nursing from UAB Birmingham, AL and a Masters in Education from University of Memphis. As an Associate Professor of Nursing at Union University in Jackson Tennessee, she was a mentor to a generation of dedicated nurses throughout the region. She retired after 28 years of teaching receiving the University's Honorary Alumni Award in 2002. She was known as the number one fan of the Union University Lady Bulldogs attending almost every game. She was passionate about travel and her bag was always packed for the next trip. She would claim to have visited all 50 states as well as several foreign countries including Spain, Italy, Greece and Japan. On February 3, 1977, she married Neal Ray Barber. She is survived by Neal, son Jay Feeley and wife Namiko of Kyoto Japan; son Brendan Feeley and wife Mende of Dallas Georgia; daughter Shawna Feeley and husband Stephen Wayne of Bristol Tennessee; daughter Melanie Melton and husband Brandon of Jackson Tennessee; daughter Michelle Reasons and husband Larry of Hohenwald, Tennessee; brother Larry Rouse and wife June of Kansas City, Missouri and 10 grandchildren Blake, Austin, Dillon, Jackson, Marina, Molly, Ethan, Emily, Erika, and Atticus. A funeral service will be held on Thursday April 8th at St Mary's Catholic Church in Jackson Tennessee at 1pm with visitation at 12pm. Flowers or donations may be sent to St Mary's. Graveside service at West Shiloh Baptist Church in Stantonville, Tennessee.

On Monday April 5, 2021, Linda Feeley Barber, loving wife and mother passed away at the age of 81. Linda was born on February 9, 1940 in Baltimore, Maryland to Bertram and Betty Rouse. Linda had a passion for learning and teaching. She received... View Obituary & Service Information

The family of Linda Feeley Barber of Jackson, TN created this Life Tributes page to make it easy to share your memories.

Send flowers to the Barber family.