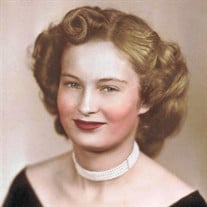 IN ACCORDANCE WITH CDC GUIDELINES CONCERNING CORONA VIRUS THE FAMILY RESPECTFULLY REQUESTS VISITORS WEAR MASKS AND OBSERVE SOCIAL DISTANCING PRACTICES DURING THE VISITATION AND FUNERAL. WE APPRECIATE YOUR COOPERATION AND APOLOGIZE FOR ANY INCONVENIENCE. Linda Vernese Gee Reed was born July 28, 1934, the daughter of the late Robert Elwood (Jack) and Lizzie Lee Russell Gee. She was united in marriage to W. G. Reed on November 2, 1955. Mr. Reed preceded her in death on March 19, 2020 following 64 years of marriage. Linda graduated from Ramer High School in 1953. After graduation she moved to Memphis to attend business classes. She worked in her aunt and uncle's record shop until she was old enough to be hired as a bookkeeper. During her early days in Memphis she lived in the Lowenstein Mansion, which served as a boarding house for young women who had moved to Memphis from outlying rural communities to find work. Linda Vernese was a wonderful mother and grandmother. She was devoted to her family and made it her life's mission to care for them. She served as a room mother and was a member of the PTA from elementary through high school, serving on the Board and as President. She also served as a den mother for Cub Scouts and as a leader in both the Girl and Boy Scout organizations. She loved visiting the Memphis Zoo and walking through the Memphis Botanical Gardens. Bowling, playing cards, traveling, reading, and watching sports were some of her favorite activities. She loved adventures, the biggest of which was keeping her grandsons. She was a devoted wife and mother; her children felt abundantly blessed to have such a wonderful mother and were privileged to call her "mom." She was always willing to serve in any capacity; no job was too big or small. Linda Vernese was a member of the Church of Christ. Mrs. Reed departed this life peacefully in her home on January 24, 2022 in Memphis, Tennessee at the age of 87 Years, 5 Months, 27 Days. She is survived by a daughter, Abby Brewer and husband Ken of Cordova, TN; two sons, Kim Reed and wife Darlynn of Cookeville, TN and Russell Reed of Key West, FL; three grandchildren: Adam Brewer and wife Allison of Olive Branch, MS, Benjamin Brewer of Knoxville, TN, and Margaret LaFevre and husband Craig of Cookeville, TN; three great-grandchildren: Eli, Sledge, and Wells; three brothers: Max Gee of Bethel Springs, TN, Jimmy Gee of Hornsby, TN, and Robert Gee and wife Tammy of Michie, TN; two sisters, Kathy Hobbs and husband Tommy of Jackson, TN and Billie Autry and husband Jerry of Bethel Springs, TN; a sister-in-law and dear friend, Avis Reed; and many nieces, nephews, extended family and friends. In addition to her husband and parents, Mrs. Reed was preceded in death by a brother, Jerry Gee, and a sister-in-law, Linda Gee. The family wishes to express their sincere gratitude to everyone who has supported and prayed for them during this time of transition.

IN ACCORDANCE WITH CDC GUIDELINES CONCERNING CORONA VIRUS THE FAMILY RESPECTFULLY REQUESTS VISITORS WEAR MASKS AND OBSERVE SOCIAL DISTANCING PRACTICES DURING THE VISITATION AND FUNERAL. WE APPRECIATE YOUR COOPERATION AND APOLOGIZE FOR ANY INCONVENIENCE.... View Obituary & Service Information

The family of Linda Vernese Gee Reed of Memphis, formerly of McNairy County created this Life Tributes page to make it easy to share your memories.

IN ACCORDANCE WITH CDC GUIDELINES CONCERNING CORONA VIRUS THE...

Send flowers to the Reed family.