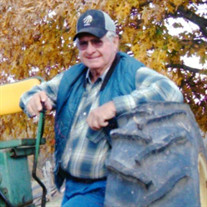 Lloyd E. Blankenship was born on November 21, 1937 in Hookers Bend, Tennessee to Lloyd A. Blankenship and Earlie Loveda Blankenship. On January 22, 2021, he left this world and took the hand of his boss man. In 1954, walking down the railroad track in a red sweater he saw the love of his life, Wanda Householder. He went home and told his mother he met the woman he was going to marry. Lloyd would hitchhike 75 miles to go see his woman. In 1957, after asking her daddy three time for her hand in marriage he finally said Mary write ‘em a note I’m tired of him asking just let them get married. From being raised on a farm throughout his life, he eventually saw his wife, got married and they moved to Illinois. “Through teardrops and laughter, they walked through this world hand in hand.” As they were settling, Lloyd soon started working at Valley City, a trucker company, along with two others jobs one in the Mail Room in Austin Western and a side job of his which was being a co-owner of Landscaping that consisted of tree work. They continued living in Illinois until Lloyd realized his dream was to be a farmer, so they decided to move back to Tennessee as his heart always belonged to the country. Continuing their life in Tennessee, Lloyd had three jobs once again, but it was more like hobbies to him. He farmed and cattled most of the time until he was sitting in the seat of a John Deere Tractor and got saved in the year 1973. Not long after he was saved, he had the calling from God to preach. Interests throughout his life was fellowshipping with people and faithfully living the Bible’s word with the philosophy of preaching love. Being happily married, they had four children which was three yankees and one true southern Bell. He was blessed with eight grandkids and nine great grandkids that meant the world to him. From his church family growing overtime, along with the great friends he has made in his lifetime as well, he was known to them as their best friend in the world, Lloyd. Lloyd treated everyone like family and talked to everyone especially the children to let them know that they were loved and to educate them about the Bible. Lloyd is survived by his wife, Wanda; his children, Ricky (Lisa), Ronnie, (Angie) Lavonda “Sis” (Rick), Ginger, (Wayne); six sisters; three brothers; eight grandchildren; and nine great grandchildren. In addition to his parents, he was preceded in death by a granddaughter, Mindy Blankenship, one great granddaughter, Breelin Blankenship, and one sister, Gloria Faye Blankenship. Due to Covid-19, the family of Lloyd Blankenship have chosen to honor him with a Graveside Service at Milledgeville Cemetery, Thursday, January 28, 2021, at 11 A.M., with Jon Austin and Jimmy Kelley officiating. Memorial donations may be made to Sinners Hope Church, 430 Fellowship Road, Sardis, TN 38371.

Lloyd E. Blankenship was born on November 21, 1937 in Hookers Bend, Tennessee to Lloyd A. Blankenship and Earlie Loveda Blankenship. On January 22, 2021, he left this world and took the hand of his boss man. In 1954, walking down the railroad... View Obituary & Service Information

The family of Lloyd E. Blankenship created this Life Tributes page to make it easy to share your memories.

Send flowers to the Blankenship family.