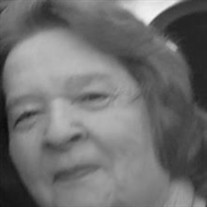 Marilyn Gallaher, age 81, passed away on Tuesday May 18, 2021. Marilyn was born in Chewalla, Tennessee on November 25, 1939, the only child of Margie and Hugh Fulton. She grew up in McNairy County and was the salutatorian of her class, a particularly impressive accomplishment given that she skipped a grade. She began her long and distinguished banking career at Security Bank in Corinth, Mississippi. In 1970, she moved to Jackson, Tennessee and began working for National Bank of Commerce at the Royal Street Branch as a teller, then a head teller, and completed her career in a new area for her -- annuity products -- for Union Planters Bank of Jackson. Marilyn was the gold standard of customer service and was truly a banker’s banker. Upon her retirement in 2002, Bank President Gary Grisham said, “If customer loyalty and appreciation were measured in art, Marilyn would be held in the same regard as Mozart, Bach, Picasso and Michelangelo.” A member of West Jackson Baptist Church, Marilyn loved a wide array of gospel music. When her health was better, she enjoyed attending concerts and collecting records. She was an avid follower of the NBA, particularly the Miami Heat. She was quite the student of the game and a bit of an armchair coach. Hands down, her favorite past time of all was spending time with her beloved grandkids. Marilyn leaves her daughter Cindy Bennett and son-in-law Rick Bennett of Germantown, Tennessee and her granddaughter Amanda Bennett Hanrahan and husband Brooks and grandson Curt Bennett, all of Atlanta. The family will have a private graveside service. In lieu of flowers, donations may be made to Paralyzed Veterans of America Mid-South Chapter, 1030 Jefferson Avenue, Room 2D-100, Memphis, TN 38104 or West Jackson Baptist Church Senior Adult Ministry, 580 Oil Well Rd, Jackson, TN 38305

Marilyn Gallaher, age 81, passed away on Tuesday May 18, 2021. Marilyn was born in Chewalla, Tennessee on November 25, 1939, the only child of Margie and Hugh Fulton. She grew up in McNairy County and was the salutatorian of her class, a particularly... View Obituary & Service Information

The family of Marilyn Gallaher of Jackson, TN created this Life Tributes page to make it easy to share your memories.

Send flowers to the Gallaher family.