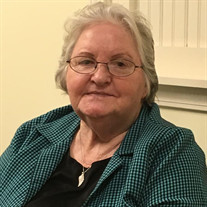 Not sure what to send?

MARY ALICE MOSIER Henderson, TN: Mary Alice Mosier, age 81, passed away Friday May 13, 2022 at Jackson Madison County General Hospital. She was born January 13, 1941 in Hornsby, TN daughter of the late Otis and Ophia Hatch Hill. She attended school in Hornsby. She married Clarence Mosier in October 1955, and they made their home in Henderson. He preceded her in death on January 9, 2020. She was a wife and wonderful mother of nine children and a loving grandmother. She was a devoted Christian and member of Palestine Baptist Church, who loved crafts, drawing, and reading (especially her Bible). She is survived by four sons, Ricky Mosier of Bolivar, Jeff Mosier (Lisa) of Henderson, Tony Mosier of Henderson, and Dale Mosier of Jackson; daughter, Pat Jenkins of Jackson; two brothers, Lloyd Hill and James Hill both of Heber Springs, AR; six sisters, Judy Ann McKay of Somerville, Faye Williams of Memphis, Rosaline Knipper of Henderson, Francis Kocher of Frazeyburg, OH, Betty Jo Mattingly of Ripley, MS and Bernise Dillingham of Memphis; sixteen grandchildren and twenty-three great grandchildren. She was preceded in death by her parents and husband; two sons, Timothy Mosier and Danny Mosier; two daughters, Rhonda Gail Mosier and Barbara Sue Mosier; two brothers, Wilford Hill and O’Gene Hill; and a sister, Elsie Rutherford. A graveside service will be held at 11:00 am Monday, May 16, 2022 at Cave Springs Cemetery with Anthony Rowland officiating. The family will receive friends at the cemetery beginning at 10:30 am Monday.

The family of Mary Alice Mosier of Henderson, TN created this Life Tributes page to make it easy to share your memories.

Send flowers to the Mosier family.