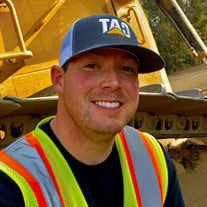 Michael Keith Lambert was born April 4, 1989 in Selmer, TN the son of Ronnie Lambert and Regina Kay Colwell. Michael worked for Operating Engineers International Union Local #320. He worked on the pipeline as a heavy equipment operator for the last 10 years. He traveled throughout the states with his job. He was an avid outdoorsman and always enjoyed hunting, fishing, playing in the mud with his toys, or riding horses competitively. He was a collector of hats and rarely did you see him without one. Michael was a wonderful son, brother, husband, dad, uncle and friend. His warm smile and laughter was contagious - his heart was sincere and kind - his personality was bigger than Texas - Michael was an all-around great guy who people flocked to for friendship and laughter. Michael departed this life on December 7, 2020 in Front Royal, VA at the age of 31 Years, 8 Months, 3 Days. He is survived by his wife, Ashley Wilson Lambert of Henderson, TN; daughter, Ella Sophia "Sophie" Lambert; a son due in May of 2021; stepson, Braxton Wilson; mother, Regina Colwell of Adamsville, TN; father, Ronnie Lambert and wife Renee of Adamsville, TN; four sisters, Synica Nichole Berryman and husband Tyler of Adamsville, TN, Crystal Williams of Corinth, MS, Hannah Leanna and Melea Dawn Colwell both of Adamsville, TN; a brother, Roger Pitchford of Adamsville, TN; paternal grandmother, Mary Catherine Lambert of Lawton, TN; maternal grandparents, Rhonda Burns of Selmer, TN, David Colwell of Michigan and Bill Main of Bethel Springs, TN; nephews, Jon Tyler and Eli Berryman, Jaydin and Dakota Williams; in-laws, Valerie and Howard Ralston of Henderson, TN; and a host of extended family and friends. He is preceded in death by paternal grandfather, Douglas Ray Lambert.

The family of Michael Keith Lambert of Adamsville, Tennessee created this Life Tributes page to make it easy to share your memories.

Send flowers to the Lambert family.