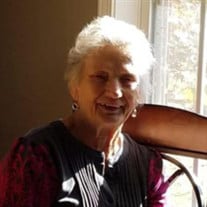 Nancy Ann Durbin was born in Olive Hill, Tennessee on April 15, 1941, the daughter of Clemon C. and Elsie Mae Franks Durbin. She was united in marriage to Donnie Lynell Weaver on February 15, 1983; their union lasted 34 years until he preceded her in death on March 12, 2017. Ma, as everyone called her, helped support her family by working the line at Brown Shoe, spending years gluing heels on every shoe that came her way. A member of Turkey Creek Baptist Church, she was a true believer, loving her Lord and worshipping Him every day. For years, Ma and Paw (Donnie) lived at 65 Oakley Road, but when Donnie died she returned to Rogers Creek, taking up residence with her son Tim and his wife Rhonda. Valuing her independence, but knowing she needed to stay close by, Nancy moved into their RV for several months, but in July of 2020 her health had declined to the point she could no longer stay by herself. So she moved into Tim and Rhonda’s home where she could still have her own space and her flowers to tend. She even put in a garden that summer. Not accustomed to sitting still, you could often find her in the kitchen, preparing food and making certain no one ever left hungry. Nancy was a great cook with her claim to fame being the best coconut cake ever, followed closely by her sweet potato casserole. As her declining health began to take its toll on her activities, she began spending more time on Tim and Rhonda’s porch, watching the world go by. And if you ever stopped for whatever reason, you would be invited to have a seat and visit. She always had time for a visit, especially if it was one of the family. Ma was a loving mother, grandmother, and great-grandmother who spent countless hours with all her babies. Traveling was also high on her list of likes, especially if the trip involved going to Kentucky to visit with her grandson Jason and his family. Christmas of 2019 found everyone headed to Orange Beach where she fell in love with the sand and the sound of the water. She even managed to hold an alligator! When her sight began to fail her she almost gave up. It seemed to be the end of her independence and definitely put a stop to her driving. But then she decided to buy a side by side so her family could chauffer her all over the place . . . deer hunting, planting food plots, sowing salad patches, and engaging in one of her favorite past times—visiting. Eventually her health kept her from doing most of the things she loved and during her final months, she was lovingly cared for by Tim and Rhonda and Rhonda’s niece Summer, someone she viewed as a special granddaughter. Nancy had filled the role of a mother for Rhonda for 40 years, celebrating the milestones of their lives and grieving the losses, especially when Nancy’s grandson Jamie and his family perished in a house fire in January of 2018. This wonderful woman left this earth on Thursday, December 3, 2020 at the age of 79 years, 7 months, and 18 days, leaving behind her three sons, Timmy Lynn Franks and his wife Rhonda, Terry Franks and his wife Vicky, and Jimmy E. Franks and his wife Betty, all of Savannah, Tennessee, as well as her step-daughter, Debra Williams and her family. In addition, she is survived by her grandchildren, Jason Franks and his wife Casey, Justin Franks (whom she always called Justin and never by his nickname “Scoot”) and his wife Katie, Jonathon Franks, Jesse Franks and his wife Madison, Amy Melson and her husband Ricky, and Jason Clark, and her great-grandchildren Caidan Franks, Haylee Franks, Madison Franks, Mackenzie Franks, Micah Franks, Kemper Franks, Emmett Franks, Emmy Lou Franks, Cody Melson, and the anxiously awaited Baby Franks who will be joining the family in February of 2021. She is also survived by her brothers Ronnie Durbin and his wife Kim, and Donnie Durbin and his wife Carmin, both of Savannah, Tennessee, and her sisters, Jimmie Gail Pickens of Adamsville, Tennessee and Carolyn Curtis and her husband Bob of Savannah, Tennessee. Other than her husband and parents, Nancy was preceded in death by her brothers Frank Durbin, whose wife Dorothy still survives, James (Cobb) Durbin, and an infant brother named Joe as well as her sister Reba Nell Durbin, her grandson Jamie Franks and his wife Robyn, her granddaughter Lezlee Franks, and her two great-grandchildren, Brody and Josie Franks, who we’re pretty sure greeted her with a great deal of excitement upon her arrival in Heaven.

Nancy Ann Durbin was born in Olive Hill, Tennessee on April 15, 1941, the daughter of Clemon C. and Elsie Mae Franks Durbin. She was united in marriage to Donnie Lynell Weaver on February 15, 1983; their union lasted 34 years until he preceded... View Obituary & Service Information

The family of Nancy Weaver created this Life Tributes page to make it easy to share your memories.

Send flowers to the Weaver family.