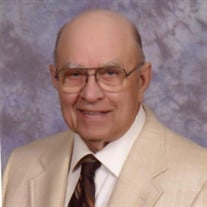 Paul C. Davis, Jr. of Savannah, passed peacefully to his heavenly home November 23, 2020, at the age of 90 years, 3 months, and 13 days. He was born in McNairy County, Tennessee, on August 10, 1930, the son of the late Paul and Dulcie Swiney Davis. On May 8, 1958, he was united in marriage to Mary Nell Umphers, who survives. Paul C. served his country proudly in the Air Force from February 1952 until his honorable discharge in April 1955. He enjoyed raising horses, cattle, and enjoyed riding in his wagon pulled by mules. Paul C. was a lifetime member of the American Quarter Horse Association and the Black Angus Association. He was an honest man, a loving father, husband, daddy, and grandfather; his joys were his granddaughters, his family, and his Savior. He was a member of First United Methodist Church in Savannah since the age of 12 and served as the Sunday School Superintendent for 30 years. His life's work was Davis Bros. Inc., which he and his brother Billy Frank Davis owned in Crump. Their trucks hauled gravel, sand, concrete, and other materials as well as concrete blocks that were produced by their block plant. After his retirement, he enjoyed working in his yard and mowing his grass. Paul C. is survived by his wife of 62 years and 6 months, Mary Nell Davis of Savannah, Tennessee; sons, Brent Davis and his wife Pam of Counce, Tennessee, and Greg Davis and his wife Gigi of Savannah, Tennessee; grandchildren, Gary Davis, Kimberly Hosea, Brittany Davis, and Mary Elizabeth Davis; four great grandchildren; and a brother, Brodie Davis and his wife Bobbie of Savannah, Tennessee. In addition to his parents, Paul C. was preceded in death by a son, Gary Davis; a sister, Mary Lou Smith; and a brother, Billy Frank Davis. Memorial donations may be made to a charity of your choice. A private family service will be held.

Paul C. Davis, Jr. of Savannah, passed peacefully to his heavenly home November 23, 2020, at the age of 90 years, 3 months, and 13 days. He was born in McNairy County, Tennessee, on August 10, 1930, the son of the late Paul and Dulcie Swiney... View Obituary & Service Information

The family of Paul C. Davis created this Life Tributes page to make it easy to share your memories.

Send flowers to the Davis family.