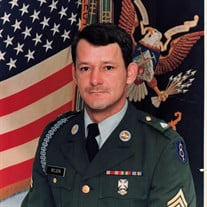 Richard (Ricky) Nelson was born February 17, 1951 in Memphis, TN the son of the late Harry, Sr. and Frances Peebles Nelson. Ricky attended McNairy Central High School. He was employed as a forklift operator for Daltile in Jackson, TN and previously worked for Murry Outdoor Products. Ricky served his country honorably in the United States Army for 12 years. Watching NASCAR and baseball were among his favorite pastimes; he enjoyed following the Earnhardts as well as the Braves, Cubs, and Cardinals. When he was younger Rickey enjoyed fishing and hunting. He was a good man with a big heart who was generous to everyone and loved his family and friends dearly. Ricky departed this life on October 21, 2020 in Selmer, Tennessee at the age of 69 Years, 8 Months, 4 Days. He is survived by a daughter, Mary Frances Nelson of Bethel Springs, TN; three grandchildren: Darian Robinson, Tamarius Hollingsworth, and Malika Irene Simpson; two great-grandchildren, Nalani Robinson and Keanu Robinson; a brother, Donald Nelson and wife Deborah of Bethel Springs, TN; two nieces, Diana Blakely and husband Randy of Jackson, TN and Denise Parmely and husband Kevin of Selmer, TN; a nephew, Dennis Nelson and wife Tanya of Vardaman, MS; special friend and caretaker, Angela Howell of Bethel Springs, TN; and many extended family and friends. In addition to his parents, Ricky was preceded in death by a sister, Anita Austein, and a brother, Harry Nelson, Jr. A memorial service will be held on October 30, 2020 at 4:00 PM at Seventh-Day Adventist Church in Bethel Springs, Tennessee.

The family of Richard (Ricky) Nelson of Bethel Springs, TN created this Life Tributes page to make it easy to share your memories.

Send flowers to the Nelson family.