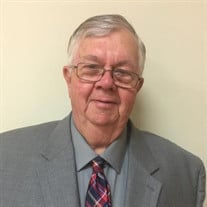 DR. RONALD JOHNSON Henderson, TN: Ronald Elmo Johnson age 77, passed away April 15, 2022 at Alive Hospice in Nashville, TN. He was born December 10, 1944 in Chester County, the son of the late Leonard Elmo and Linnie Mae Garner Johnson. He was a graduate of Chester County High School, University of Tennessee at Martin, and received his DDS from UT College of Dentistry at Memphis in 1968. He served a one year internship at the VA Hospital in Memphis and worked for the TN Department of Health. He held several professional memberships, including Lifetime member of the Seventh District Dental Society, American Dental Association and Tennessee Dental Association. He was very involved in civic activities, including service on the Chester County Board of Education for 23 years; the Chester County Lions Club where he held several offices and was a recipient of the Melvin Jones Award; President of the Chester County Alumni Association; a Charter member of the Chester County Chamber of Commerce and participant in its yearly production of Hee Haw; a member of the President’s Council at Freed-Hardeman University; assisted with the RAM Clinic, and a volunteer at the East Chester Elementary Book Fair. He was a member of the Henderson Church of Christ and served as a Deacon for many years. He married Caroline Little on November 26, 1965. They made their home in Henderson and raised two children. He enjoyed crossword puzzles, UT Sports, traveling, fishing, playing golf, and spending time with his grandchildren. Dr. Johnson is survived by his wife, Caroline Little Johnson of Henderson; a son, David Johnson and wife Deb of Franklin, TN; a daughter, Lesley Johnson Ross and husband John of Chapel Hill, TN; four grandchildren Sydney Ross, Emma Ross, Ethan Ross and Zach Johnson; two sisters, Kay Cromwell and Linda Price both of Henderson, TN. Memorial services will be 2:00 PM Saturday, April 30th at Henderson Church of Christ with Ben Flatt, Bill Wade, Robert Hatfield, Charlie Smith and Ted Moore. In lieu of flowers, donations may be made to the Chester County Lions Club; Freed-Hardeman University or the Henderson Church of Christ. Shackelford Funeral Directors of Henderson 731-989-2421

The family of Dr. Ronald Johnson, of Henderson created this Life Tributes page to make it easy to share your memories.