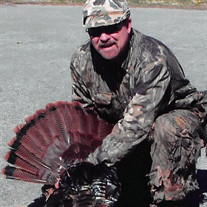 Roy Wayne Parsons, age 74, departed from this life on Tuesday afternoon, March 15, 2022 in Bolivar, Tn. Roy was born on September 29, 1947 in Hornsby, Tn to the late Chester Leroy Parsons and Mary Eloise Poole. He graduated from Bolivar Central High School and was a retired tool and die maker. Roy loved hunting and fishing and was an avid outdoorsman who prided himself on his fishing and turkey hunting skills. He loved his dogs, horses, and horseback riding. Roy was also a Vietnam veteran who was proud to have served his country. Mr. Parsons is survived by his mother, Mary Eloise Poole, two brothers, Timmy Parsons, Mike Parsons, his son, Zach Parsons (Jessica), his daughter, Temple Reed, six grandchildren, and his dogs Ben and Sally. He was preceded in death by his grandparents William and Mary Sanders, his father Leroy Parsons, and his special friend for 27 years Judy Nuckolls. Graveside services for Mr. Parsons will be held on Thursday, March 17 at 2pm at Wyatt cemetery in Hornsby with Matt Emerson, Richard Doyle and Zach Parsons officiating. Memorials can be sent to Reach360 church 11670 US-64 Somerville, Tn 38068.

The family of Roy Parsons created this Life Tributes page to make it easy to share your memories.

Roy Wayne Parsons, age 74, departed from this life on Tuesday...

Send flowers to the Parsons family.