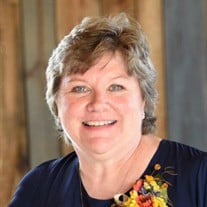 Sherry Harrison Henderson, TN: Sherry Renee Harrison, age 57, passed away at Jackson Madison County General Hospital, Saturday, January 01 2022. Mrs. Harrison was born in Franklin, TN, February 08, 1964, the daughter of Johnie Wayne Plunk and the late Betty Sue Cummings Logan Plunk. She grew up in Henderson and was a 1982 graduate of Chester County High School. She attended U.T. Martin and earned a Bachelor of Science degree in General Studies. She married Jeff Harrison on December 15, 1990 and they made their home in Henderson. She worked for Jackson National Bank for 11 years and then she worked for Southwest Human Resources while finishing her degree. Lastly, she worked for the Tennessee State Department of Human Resources for over 20 years, serving most recently as Field Supervisor. She enjoyed reading and was an avid collector of Mickey Mouse and Disney paraphernalia. She did volunteer work at First Baptist Church especially the Soup Kitchen as well as Meals on Wheels. Her great joy was spending time with her grandchildren Julia and John Brantley. Survivors include her son Taylor Harrison (fiancee Madison Churchwell) of Henderson, and daughter Jessica Pace (Cody) of Soddy Daisy, TN; two grandchildren Julia and John Brantley Pace; her father Johnie Wayne Plunk; Jeff Harrison; a brother Phillip Plunk and sister Sandra Bethea (Russ) all of Henderson. In addition to her mother, she was preceded in death by a brother Anthony Logan. In lieu of flowers, the family requests donations be made to First Baptist Church of Henderson or St. Jude’s Children’s Research Hospital. Funeral services will be 11:00 AM, Wednesday, January 5, 2022 at Shackelford Funeral Directors of Henderson – Crook Avenue Chapel with Brad Patterson officiating. Burial will follow in Henderson City Cemetery. The family will receive friends at Crook Avenue Chapel from 5:00 PM to 8:00 PM Tuesday, January 4, 2021. Shackelford Funeral Directors of Henderson

The family of Sherry Renee Harrison of Henderson created this Life Tributes page to make it easy to share your memories.

Send flowers to the Harrison family.