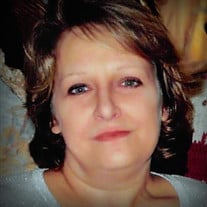 Sherry Anne Jackson was born December 1, 1964 in Jackson, TN, the daughter of JoAnne Forshea and the late Hoby Dorris Jackson. Sherry was a 1982 graduate of Bolivar Central High School. She lived in Vero Beach, Florida, after high school, operating her own house cleaning business. She returned to Hardeman County 25 years ago, making her home in Saulsbury, TN. Sherry was a kind hearted and very loving person. She loved her family very much. She will be dearly missed by her family. Sherry passed away at her home on September 25, 2021, following a lengthy illness. She is survived by a son, Tyler Jackson of Saulsbury, her mother, JoAnne Forshea; a brother, Jeff Jackson of Union City, a sister, Karen Hooper (Larry) of Toone, a sister, Dianne Jackson of Saulsbury, a sister, Margo Tims (Richard) of Toone, a niece, Ashley Hooper of Jackson, and two nephews, Seth Tims and Samuel Tims of Toone. Sherry was preceded in death by her loving Aunt Frankie Jackson Murray. When her Aunt Frankie became ill in her later years in life, Sherry faithfully took very good care of her until her death. She also leaves behind her eight cats, all that were once a stray, wandering on her back porch looking for a place to stay. She loved animals and would not turn any away. A private memorial service will be held at a later date celebrating Sherry's life. Memorial contributions in her name may be sent to the Hardeman County Animal Shelter.

The family of Sherry Jackson created this Life Tributes page to make it easy to share your memories.

Send flowers to the Jackson family.