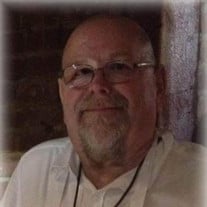 Charles Terry Huggins, husband, Daddy, Poppa, brother, son, friend, spreader of joy and laughter to all, left his earthly home on Thursday, March 11, 2021. Terry was born September 19, 1957 in Selmer, TN, the son of the late Irma Plunk Huggins and James Benny Huggins. Terry graduated from McNairy Central High School in 1975 and worked a variety of jobs throughout his life. He worked at Town House Mobile Homes, Henco, and owned Circle H Western Wear with wife Whitney for several years. He worked largely in construction for the majority of his years at Bell Construction and Vanderheyden Construction. After an injury that resulted in disability, only his family and friends were privileged enough to enjoy his carpentry skills. He was a lover of the small details of life, never taking for granted a good cup of coffee, a well done tv show (especially the westerns, true crime, or alien themed ones), an evening bowl of Butterfinger ice cream, or the simple pleasure of writing his name on all his material possessions with the sharpies he kept safely in his pocket at all times. He excelled at so many things, but perhaps was best known for his creative mind and woodworking skills, carefully producing any house, piece of furniture, or craft his family and friends’ imaginations could think up. You simply placed an order, and the magic garage spit it out in a timely fashion. He had the most contagious laugh and an impeccable sense of humor; pulling off the best pranks, cracking the best jokes, and seeking out or telling a good story whenever possible, sometimes to the dismay of his easily embarrassed offspring. He was the ultimate supporter, pushing you to be your best while simultaneously showing you how enough and perfect and loved you already are. “As long as you are happy” served as a reminder that happiness was his ultimate goal for us all. He was a stranger to none, a friend to all and embodied the phrase “Treat others as you want to be treated”. He would give the shirt off his back, the food off his table, and the love in his heart to any and all who needed it. In a final act of kindness, he served as an organ donor so that others may live. He married Whitney Murrah Latta on November 7, 1981, but their love story began many years before, and would become a favorite to those who know and love them for many to come, hardly ever seeing one without the other at their side. His absolute joy was his family, and he theirs. He leaves a void that will never be filled, but gave a love so immensely strong and unforgettable that it will stay with us always. Terry is survived by his wife Whitney; two daughters, Courtney Michelle Lands (Husband Joe) and Shelby Leigh Huggins (Partner Tim Whitlinger); two grandchildren, Ashtyn Lands and Sawyer Kate “Bitty” Lands; two brothers James Stanley Huggins (Susan) and Ricky Wayne Huggins; and lifelong special friends: Greg and Gale Treece and family; Larry and Marilyn Smith and family; Debbie and Rich Henry; Jennie Anderson Kutrip; and a host of “children” he treated as his own: Melissa, Rachel, Dakota, Autumn, and so many others. In addition to his parents, those who passed before him were grandparents Daniel and Martha L. Plunk; Robert Lee and Nannie Cheshire Huggins; granddaughter, Hadley Aaliyah Lands; and numerous aunts, uncles, and cousins. Wearing masks for visitation and service will be appreciated.

The family of Terry Huggins of Selmer, TN created this Life Tributes page to make it easy to share your memories.

Send flowers to the Huggins family.