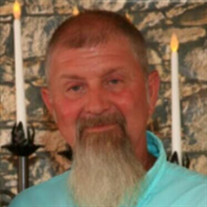 Tracy Lee Thomas was born December 15, 1967 in Jackson, TN the son of Freddie Thomas and the late Patsy Sanders McManus. Tracy worked for over 20 years as a welder with Steamfitters Local Union 614. He was an avid outdoorsman enjoying hunting - deer, duck and turkey along with fishing. He loved spending time with his children and especially his grandchildren, Huntley and Oakley. Tracy was an excellent cook, master of chanterelle mushrooms and crawfish boils which he enjoyed preparing for his family and friends. He was a selfless man with one heck of a sense of humor, always the life of the party and enjoyed the little things in life that most take for granted. He lived by his favorite quote, "that's the way world goes around." He proudly served his country in the United States Navy from November of 1990 to August of 1994. He was an expert marksman in M-16 rifle and .45 caliber pistol. Tracy departed this life on May 8, 2022 in Selmer, Tennessee at the age of 54 Years, 4 Months, 23 Days. He is survived by two daughters, Hannah Nicole Thomas and partner Andrew Tull of Bethel Springs, TN, Sarah Jewell Thomas of Chewalla, TN; a son, Noah Wayne Thomas and partner Mika Crouse of Bethel Springs, TN; father, Freddie Thomas and wife Elaine of Selmer, TN; two grandchildren, Huntley Kaye and Oakley Klay Thomas; a sister, Kerri Thomas Bizzell of Selmer, TN; mother of his children, Sandy Thomas Junkin of Bethel Springs, TN; his precious fur baby, Tessa the Shih Tzu; and a host of extended family and friends. In addition to his mother, Mr. Thomas was preceded in death by his wife, Sherry Garrett Thomas.

Tracy Lee Thomas was born December 15, 1967 in Jackson, TN the son of Freddie Thomas and the late Patsy Sanders McManus. Tracy worked for over 20 years as a welder with Steamfitters Local Union 614. He was an avid outdoorsman enjoying hunting... View Obituary & Service Information

The family of Tracy Lee Thomas of Selmer, Tennessee created this Life Tributes page to make it easy to share your memories.

Send flowers to the Thomas family.