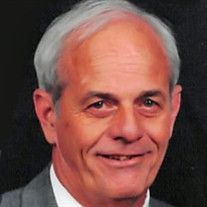 Mr. Walter L. Anderson, P.E., age 83, of Bolivar, departed this life on Saturday morning, November 27, 2021, at Methodist Hospice Residence in Memphis. He was born in Richwoods, TN, the son of the late Thomas and Clara Vaden Anderson. After receiving his Bachelor of Science degree in Civil Engineering from the University of Tennessee at Knoxville in 1961, he married the former Martha Jewel Clifft on September 1, 1962. Mr. Anderson served his country in the US Army from 1961-1963, first at Fort Knox, KY and then at Ft. Bragg, SC where he helped prepare for the eventual Bay of Pigs Invasion of Cuba. He worked for Buchart and Horn Engineering, Inc. for three years and Ellers, Oakley, Chester and Rike Engineering in Memphis for five years. He and Martha Jewel moved to Hardeman County in 1972. Mr. Anderson was a self-employed engineer for 44 years, working part-time for the City of Bolivar. An active member of the Bolivar First Baptist Church, he was a deacon for over 40 years. He was responsible for helping design their annual Living Christmas Tree, assisted in directing the "King's Kids Choir" for over 25 years, taught Sunday School, supervised the Training Union program, worked on the Bethlehem Walk and served on numerous church committees. He was Scoutmaster, along with Joe Fulghum, of BSA Troop 92 in Bolivar and was a member of the Order of the Arrow. His love of flying led him to become a licensed aircraft pilot. He loved to fish, hunt, go to the river and was an avid fan of UT Vols, Trinity Christian Academy and Briarcrest Christian School Athletics. Most of all, he was a man who put his family first. He leaves his wife of 59 years, Martha Jewel Anderson of Bolivar; three sons, Bradley Clifft Anderson (Kristi) of Jackson, Jeffrey Lynn Anderson of Bolivar and, Wesley Shane Anderson (Ashley) of Rossville; one sister, Patsy Brooks of Richmond, VA; one brother, Bill Anderson of Dresden, TN; and six grandchildren, Whitney Anderson of Melbourne, Australia, Rachel Anderson of Nashville, Stephen Anderson (Maria), also of Nashville, Ashlin Anderson of Jackson, Bailey Overby of Knoxville and, Reece Overby of Rossville. In addition to his parents, Mr. Anderson was preceded in death by his brother-in-law, Bill Brooks; and his sister-in-law, Bobbie Jo Anderson. Memorials may be sent to the Bolivar First Baptist Church Children's Choir, 826 West Market Street, Bolivar, TN 38008; the American Cancer Society [http://www.cancer.org]; or the Methodist Hospice Residence, 6416 Quince Road, Memphis, TN 38119.

Mr. Walter L. Anderson, P.E., age 83, of Bolivar, departed this life on Saturday morning, November 27, 2021, at Methodist Hospice Residence in Memphis. He was born in Richwoods, TN, the son of the late Thomas and Clara Vaden Anderson. After... View Obituary & Service Information

The family of Walter L. Anderson, P.E. created this Life Tributes page to make it easy to share your memories.