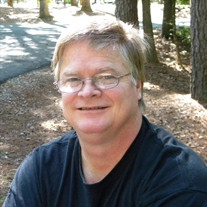 Walter Byron Moore was born in Minden, Louisiana on June 25, 1963, the son of Van Rose and Maria Elena Rodriguez Moore. On March 12, 2011 he was united in marriage to Lori Michelle Todd who survives. Walter graduated from Edison High School in San Antonio, Texas then enrolled in the University of Texas at San Antonio, receiving his Bachelor’s degree in 1990. Valuing education highly, he continued his studies at Crichton College in Memphis, followed by Trinity University, and Union University. At the time of his death, he was enrolled in online courses with the Birmingham Theological Seminary studying Biblical Counseling. Walter supported his family by working for FedEx as a Senior Analyst Programmer and Application Architect, retiring from the company in May of 2019 after 23 years and 3 months of employment. Walter was bold and outspoken regarding his faith, and passionate about theology and sound doctrine. Having been a licensed minister for years, he served as the Men’s Ministry Director with the Sardis Baptist Church in Sardis, Tennessee where he and Lori were faithful members. He had just begun to help launch a new Hispanic ministry with the Beech River Association. In previous years he had worked with Catalyst Missions, and taught church plant training in Nicaragua. Recently he became a member of Wycliffe Bible Translators; it was at their request that he began developing an app that would enable people to memorize scriptures in 2,700 different languages. Sadly, it was a task he was never able to finish. Walter Byron Moore departed this life on Wednesday, November 17, 2021 at the age of 58 years, 4 months, and 23 days. He leaves his wife Lori of Enville, Tennessee, his three children, Ian Moore of Paducah, Kentucky, Samuel Moore and his wife Shawna of Oakland, Tennessee, and Julia Moore of Hickory Flat, Mississippi, and his brother Robert “Bob” Moore and his wife Sharon of San Marcos, Texas. He also leaves his four grandchildren, Archer (Moore) Tozer of Judsonia, Arkansas, and Ara Rain, Alora Rose, and Aspen Robert Moore, all of Oakland, Tennessee. He was preceded in death by his son, Michael Ross Moore of Searcy, Arkansas. To honor Walter's memory, donations may be made to: Sardis Baptist Church Moore Wycliffe Ministry 34630 TN 104 Sardis, Tennessee 38371 https://www.sbcsardis.org/donations.html

Walter Byron Moore was born in Minden, Louisiana on June 25, 1963, the son of Van Rose and Maria Elena Rodriguez Moore. On March 12, 2011 he was united in marriage to Lori Michelle Todd who survives. Walter graduated from Edison High School... View Obituary & Service Information

The family of Walter Moore created this Life Tributes page to make it easy to share your memories.

Walter Byron Moore was born in Minden, Louisiana on June 25,...