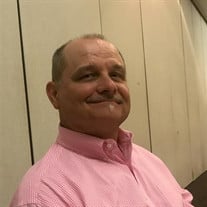 William Clark Hively was born November 23, 1961 in Selmer, TN the son of Barbara McCann Hively Goodrum and the late William Paul Hively. He was united in marriage to Rhonda Diane Taylor on January 14, 1996. Clark was full of life, and he had a huge personality from the time he was a little boy. He is remembered by many as a young boy at his parent's car lot, working and driving cars right along with the grown men. As a young man, he was always proud of being a part of the 1979 MCHS football team, the first winning team for the Bobcats. He's spent the last 26 years with the love of his life, building a life they loved and enjoying each other's company. He loved to fish or hunt, or anything that he could spend some time with the people he loved. He supported his family and his grandkids in anything they wanted to do. If you wanted to talk about farming or tractors or goats, he could always find the time. He loved being at the barn or driving a truck. He loved talking about football or Westerns, especially Gunsmoke. One of his most favorite ways to spend time was with his dominoes buddies. He loved that time for many, many years. He was always up for a game of Rook or playing with Max, their sweet dog. Clark, or his most favorite name of Grumps, was usually smiling and trying to make you laugh, or just aggravate you for fun. He'll be remembered by those he loved and who love him as loyal, fun, loving, and ready to see his Savior. . He is survived by his wife, Rhonda Hively of Selmer, TN; his mother, Barbara Goodrum of Selmer, TN; three daughters: Brooke Harbin and husband Jaylon of Stantonville, TN, Deanna Williams and husband Jon of Arlington, TN, Kristin Smith of Stantonville, TN; sister, Suzie Glover and husband Jack of Stantonville, TN; a brother, Jason Hively and wife Anita of Selmer, TN; step sister, Lisa Dillion and husband Jimmy of Selmer, TN; six grandchildren: Alexandria "Lexie" Smith, JT Smith, Allie Williams, Dalton Williams, Cruz Harbin, and Cash Harbin; and a host of nieces and nephews. In addition to his father, Mr. Hively was preceded in death by his step father, Larry Gene Goodrum. Memorials may be made to St. Jude

William Clark Hively was born November 23, 1961 in Selmer, TN the son of Barbara McCann Hively Goodrum and the late William Paul Hively. He was united in marriage to Rhonda Diane Taylor on January 14, 1996. Clark was full of life, and he... View Obituary & Service Information

The family of William Clark Hively of Selmer created this Life Tributes page to make it easy to share your memories.

Send flowers to the Hively family.