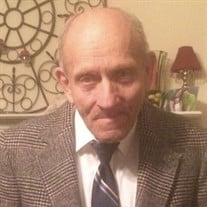 ALLEN K. JONES Atoka, TN: Allen K. Jones age 86 passed away December 15, 2020 at Signature Healthcare of Memphis. He was born May 1, 1934 in Chester County, the son of the late Hugh Ned and Vassie Jay Eason Jones. He graduated from Chester County High School. He was a member of the National Guard and then joined the Air Force. He went to work for Firestone in the early 1960’s, working in the manufacturing of the tires. Later he moved to the distribution center and worked in shipping the tires abroad. This was while he was living in Memphis. He worked for Firestone/Bridgestone for thirty-five plus years, retiring in the late 1990’s. He was an avid dog lover. As a young man he loved to hunt, or at least shoot his gun. Mr. Jones is survived by a son, Matt Jones (Carrie) of Millington; two daughters, Mitzi Phillips of Crestview, FL and Virginia Thornton (Richard) of Atoka, TN; two grandchildren, Andrea Vida (Ryan) and Jessica L. Yarbrough (Josh) and three great grandchildren, Alexis C. Kanizar, Benjamin Vida and Christopher Vida and a sister, Doris Brannon of Hacienda Heights, CA. He was preceded in death by his parents, his wife, Virginia Louise Bartholomew Jones in 2015, two brothers, Henry N. Jones and Albert J. Jones and four sisters, Sara Peddy, Lucille Ray, Louise Pepple and Joyce Pruitt. Graveside services will be 11 AM Saturday, December 19th at Holly Springs Cemetery with Bro. Jimmy Borroughs officiating. Shackelford Funeral Directors of Henderson 731-989-2421

The family of Allen K. Jones - Atoka created this Life Tributes page to make it easy to share your memories.