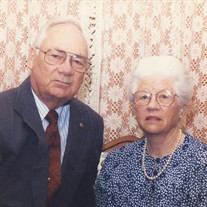 Arlene Hoover Brown HENDERSON, TN: Arlene Hoover Brown, age 96, died Tuesday morning, January 25, 2022, at Southern Oaks Assisted Living in Henderson, TN. Arlene Brown was a woman of many roles, and she filled every single role with grace and kindness. Her stature was small, her personality was large, and her circle of influence was immeasurable. She never met a stranger, and after talking for a few minutes, you would learn that she knew someone in west Kentucky who was related to you. Even as her physical strength diminished, she persisted in writing cards and making phone calls checking up on and encouraging individuals. She lived her life as a blessing to others, and strived to live a “less of self, more of thee” life every day. Arlene was born near Benton, KY and grew up in Calvert City, KY, the daughter of the late Floyd Raymond Hoover and Sadie Leona Sparks Hoover. She graduated from Calvert City High School in 1943 and furthered her education at Draughon’s Business School in Murray, KY. After moving with her family to Paducah, KY, she was very active in the Murrell Boulevard Church of Christ and worked for the school board. She married Douglas Eugene Brown in 1947 and they made their home in Paducah. A decade later, they moved to Mayfield, KY, where they raised their four sons. In Mayfield, Arlene worked for many years in the Mayfield school system. She also became very active in the Cub Scouts, Freed-Hardeman University Associates, and several civic organizations. She helped Doug in developing the West Kentucky Youth Camp, which was one of their true loves. They were members of the Northside Church of Christ in Mayfield, and she served for many years as a Bible school teacher. Due to a family illness, Arlene and Doug moved to Memphis, TN in 1981 to make their home near their son Doug, Jr.’s family. While in Memphis, they were members of the Highland Street Church of Christ where she was a regular worker in the Sunday school program. She continued to be very involved with the Freed Hardeman University Associates. Arlene and Doug moved to Henderson, TN, in 2002 and they were members of the Estes Church of Christ. She worked numerous hours with the Freed Hardeman University Associates, and enjoyed helping take care of their two grandsons Kyle and Zachary. Arlene is survived by her four sons; Douglas Brown, Jr. and wife Barbara of St. Louis, MO, Steve Brown of Fort Myers, FL, Michael Brown and his wife Diane of Decatur, IL, and Jim Brown and wife Susan of Henderson, eight grandchildren, and four great grandchildren. Arlene was preceded in death by her husband Doug Brown and her brothers Albert, Tom, Kenneth, John, and Jerry Hoover. Funeral service will be at noon on Tuesday, February 8 at the Northside Church of Christ in Mayfield, KY, with Gary Knuckles of Briansburg, KY, officiating. Visitation will be at 11:30am, and burial will follow at the Woodlawn Memorial Cemetery near Paducah, KY. The family will receive friends at Shackelford – Casey Chapel in Henderson, TN, from 5:00 PM until 8:00 PM on Saturday February 5. The family has asked that mask and social distancing be observed at the funeral service in Mayfield. In lieu of flowers the family request memorials be made to any of these organizations: Western Kentucky Youth Camp / www.wkyc.org Rett Syndrome Research Trust / https://reverserett.org/donate/ Freed Hardeman University Associates / https://www.givecampus.com/campaigns/21241/donations/new Henderson, Tennessee

The family of Arlene Brown created this Life Tributes page to make it easy to share your memories.

Send flowers to the Brown family.