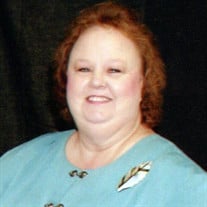 Barbara Jean Holmes Crowell Barbara Jean Holmes Crowell departed this life to be with her Eternal Father, sister, and earthly father on June 6, 2021 at the age of 68, after an extended illness. She was born on August 11, 1952 in Memphis to the late Clyde Elbert Holmes and Sue Canaday Holmes Poff. She was a member of the Horn Lake, MS Chapter of Rainbow Girls, attaining the position of worthy matron. She graduated from Horn Lake High School, Horn Lake, MS in 1970 and soon thereafter met her husband Jerry at a Friday night dance, came home and told her mother, “That’s the man I’m going to marry.” That she did, and they remained together for over 50 years. Prior to her illness limiting her mobility, she was very active in community affairs, serving as President and Vice-president of Enville Ruritan Club / Enville Community Club for many years. She was an active member of the Enville United Methodist Church, where she was a Sunday school teacher and held numerous committee positions and was always the Art Director of EUMC Vacation Bible School. She worked in the Hardin County School System for a number of years as a secretary, teacher’s aide and substitute teacher. She worked for Enville Fertilizer as a secretary for 10 years. The hardest job, but most rewarding was raising three children while “holding the fort down” as a trucker’s wife. She was known around home as Jean or just simply “Mama.” Jean is survived by her husband, Jerry Paul Crowell; one son, Jeremy Wayne Crowell; two daughters, Jennifer Dawn Crowell Hollingsworth (Tom) and Jessica Sue Crowell Culpepper all of Enville. She also leaves four grandchildren, Brittany Nicole Tomlin of Jackson, TN; Mercedes Dawn Tomlin, Tamera Beth Hollingsworth, and Aiden Riley Culpepper all of Enville; and her mother Sue Poff (Jay) of Hernando, MS. In addition to her father, she was preceded in death by a sister, Peggy Holmes Whitehorn; grandparents, Lucille and Harold Tenry and Fattie and Sid Holmes. The family extends a special thanks to Adamsville Healthcare and Rehabilitation Center and Volunteer Hospice for exceptional care. The family request that any memorials be made to charity of choice or be made to the Enville United Methodist Church. The family will receive friends at Shackelford Funeral Home on Crook Ave. on Tuesday, June 8, from 5:00 PM to 9:00 PM. Funeral services will be at Shackelford Funeral Home on Crook Ave. on Wednesday, June 9, at 11:00 AM with Keith Carlson officiating. Interment will be at Milledgeville Cemetery, Milledgeville, TN. Shackelford Funeral Directors of Henderson 731-989-2421

The family of Mrs. Barbara Jean Crowell of Enville created this Life Tributes page to make it easy to share your memories.

Send flowers to the Crowell family.