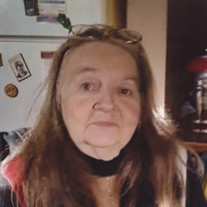 Betty Ann Powell was born October 18, 1954 in Jackson, TN, the daughter of the late Landoff Hickman and Ruby Pearl Smith Hickman. She was united in marriage to Thomas Deward Powell on April 7, 1982. Mr. Powell preceded her in death on September... View Obituary & Service Information

The family of Betty Ann Powell of Selmer, TN created this Life Tributes page to make it easy to share your memories.

Send flowers to the Powell family.