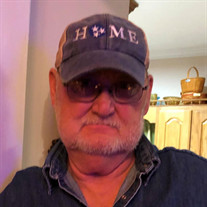 Bill Main was born July 2, 1955 in Muskegon, MI the son of the late Charles and Geraldine Ashwege Main. He was united in marriage to Linda Ramer on April 15, 1989. Bill drove a truck for Smith Metals. He attended Highlands Church in Henderson.... View Obituary & Service Information

The family of Bill Main of Bethel Springs, TN created this Life Tributes page to make it easy to share your memories.

Send flowers to the Main family.