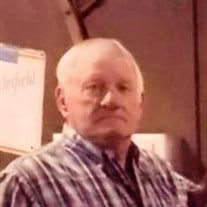 Bobby Joe Baskins was born on March 24, 1952, in Lauderdale County, Alabama, the son of the late Clarence Edward Baskins and late Doris Virginia Crotts Baskin. Mr. Baskins proudly served his country in the United States Army, retiring after 21 years of service. He worked as a local driver for the trucking industry. He was a member of the VFW and the Moose Lodge. Mr. Baskins enjoyed watching westerns, driving his truck, and fishing. He had a great sense of humor. He also enjoyed spending time and playing with his nieces and nephews, as well as spending time with his friends. Mr. Baskins departed this life on Tuesday, August 31, 2021, at his residence in Savannah, at the age of 69 years, 5 months, and 7 days. He is survived by his daughters, Raven Powers of Selmer, Tennessee and Shannon Whitley of Selmer, Tennessee; three brothers, Roy Baskins and his wife Mary Lou of Kaufman, Texas, Ricky Baskins of Selmer, Tennessee, and Randy Baskin and wife Belynda of Jacksonville, Florida; and 4 grandchildren. In addition to his parents, Mr. Baskins was preceded in death by a sister, Geraldine Baskin and a sister-in-law, Rose Mary Baskins.

The family of Bobby Baskins created this Life Tributes page to make it easy to share your memories.

Send flowers to the Baskins family.