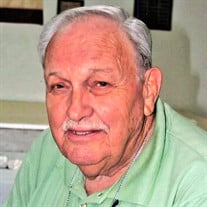 Bobby Gene Stewart was born July 26, 1933 in McNairy County, TN the son of the late Ross Everett and Lucy Brewer Stewart. Bobby was a veteran and served his country proudly in two branches of the military. He served in the United States Army and was stationed at Ft. Bragg, NC from January 21, 1955 to January 18, 1957, then transferred to the United States Air Force and was stationed at Blytheville Air Force Base from February 11, 1957 to January 25, 1961. Bobby retired from Chris-More Supply in Memphis after almost 40 years of employment. He was both admired and respected by his fellow employees and certainly by the clients he served. He played a very important part in the day to day operation of the Company and enjoyed his job immensely. Bobby departed this life on April 29, 2021 in Cordova, Tennessee at the age of 87 Years, 9 Months, 3 Days following a long illness. He is survived by his wife of 65 years, Jo Anne (Singleton) Stewart of Cordova, TN; two daughters, Roxanna Johnson and husband Richard of Myrtle, MS and Jaime Benedict and husband Lan of Cordova, TN; three brothers: Nelson Stewart and wife Becky of Huntington, TN, Jerrold Stewart and wife Billy of Mason, TN, and Rick Stewart and wife Darlene of Corinth, MS; a sister-in-law, Gail Stewart of Oxford, FL; four grandchildren: Eric Johnson and wife Raquel of Bartlett, TN, Emily Tuberville and husband Jerrid of Myrtle, MS, Joshua Benedict and wife Brittany of Cordova, TN, and Shelby Bigham and fiance Tyler Freeman of Bartlett, TN; eight great-grandchildren: Sarah Johnson, Bethany Tuberville, Jace Tuberville, Corbin Johnson, Cassie and Charlie Johnson, Zoey Marie Bigham, and Ava Lynn Bigham; and many extended family and friends. In addition to his parents, Bobby was preceded in death by two brothers, Elvin Stewart and Tommy Stewart, and a sister, Ruby Cole. In lieu of flowers the family requests donations be made to the Alzheimer's Association or the American Cancer Society.

Bobby Gene Stewart was born July 26, 1933 in McNairy County, TN the son of the late Ross Everett and Lucy Brewer Stewart. Bobby was a veteran and served his country proudly in two branches of the military. He served in the United States Army... View Obituary & Service Information

The family of Bobby Gene Stewart of Cordova, TN created this Life Tributes page to make it easy to share your memories.

Send flowers to the Stewart family.