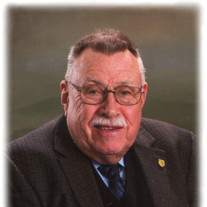 Charles David Turley, age 87, of Waynesboro, TN, received his complete healing and heavenly reward at his home on Tuesday, February 22, 2022. He was born on May 12, 1934, in Tulsa, OK to Rev. Charles C. Turley and Rev. Noma A. Hamby Turley. He married his sweetheart Mary Jo Morris Turley on May 15th, 1965, at Colcord Assembly of God, in Colcord, OK. He was a member of multiple Pentecostal churches throughout his life and for the past several years attended People’s Tabernacle Church in Savannah, TN. In 1952 he graduated high school from Southwestern High School in Waxahatchie, TX. He received his Bachelor's Degree in 1956 in Bible and Religious Education from John Brown University, Siloam Springs, AR while also attending graduate seminar at Phillips University in Enid, OK. He obtained a Master of Social Work degree in 1967 from the University of Oklahoma, Norman, OK. In 1952 Mr. Turley became an ordained minister by The Assemblies of God. After moving to Wayne County in August of 1978, David began working with Wayne County Mental Health as a Clinical Therapist. He became a Tennessee Licensed Clinical Social Worker in 1985. Soon later he was involved in helping build the new Wayne County Mental Health Center now known as Centerstone. He served as Chaplain for Volunteer Hospice the final 14 years of his career which ended in retirement of October 2019. Mr. Turley was known for providing entertainment with his guitar and sense of humor at nursing homes and occasionally at other functions. Mr. Turley had many musical talents and used them regularly to glorify the Lord. He played piano, organ, guitar and bass. He always had a love for gospel music and was a former member of The Fellowship Singers, Trinity Singers, The Grinnells and Glory Road. While attending church through the years he was organist at Waynesboro Church of God, Collinwood Church of God, and Calvary Hill Church of God in Lawrenceburg. His most favorite things were his 12-string guitar, traditional music, his pets, chocolate cake, fried chicken, his son Matthew, shiny cars, and pretty girls especially his bride of 56 years. David Turley lived his life as a personal testimony so that anyone unsaved might find salvation with the Lord through him. He strongly believed that the steps of a righteous man are ordered by the Lord, knowing full well, a man is made righteous only by the work of Jesus Christ our Lord through his unmerited grace and mercy to men. He is survived by the love of his life for 56 years, Mary Turley, one son Matthew, both of Waynesboro. Nephew Edwin Jordan (Debbie) of Kansas, OK, and niece Lisa Christenson (Marvin) of Weddington, AR. Cousin Rev. Norman Hamby (Judy) of Rogers, AR, three sisters-in-law and several other nieces and nephews. Last but not least his family dachshund Abby and two cats Monk and Calico. He was preceded in death by his parents and one sister, Iretha June Turley Jordan. Services will be held on February 27, 2022, at 3:00 PM at Shackelford Funeral Directors at Waynesboro in Waynesboro, Tennessee, with Pastor Robert Jordan, Hope Fellowship Church, Frisco, TX and Pastor John Blackwell, Shawnette Church, Collinwood, TN. officiating. Burial will follow in the Memorial Gardens at Waynesboro, Tennessee Pallbearers will be Edwin Jordan, Jason Mcwilliams, Lance Gallaher, Kevin Staggs, T.R. Berryhill, and Jerry Duren.

Charles David Turley, age 87, of Waynesboro, TN, received his complete healing and heavenly reward at his home on Tuesday, February 22, 2022. He was born on May 12, 1934, in Tulsa, OK to Rev. Charles C. Turley and Rev. Noma A. Hamby Turley.... View Obituary & Service Information

The family of Charles David Turley created this Life Tributes page to make it easy to share your memories.

Send flowers to the Turley family.