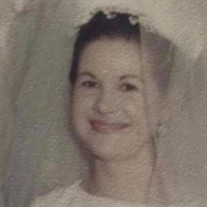 Charlotte Evans Henderson, TN Charlotte Ann Burger Evans, age 72, died April 26, 2022 at Jackson Madison County General Hospital. Charlotte was born on October 25, 1949 to Cecil and Betty Burger in Birmingham, Alabama and lived in Forestdale, Alabama until she married Patrick Newman Evans, September 4, 1969. Charlotte and Pat lived in Alabama and Jackson, Tennessee before moving to Henderson, Tennessee in 1980 where Pat taught at Freed-Hardeman University until he retired in 2019. Charlotte was an RN and worked in several different hospitals and nursing homes until she retired in 2009. Charlotte was preceded in death by her parents. She is survived by her husband, their two sons, Brian Evans of Henderson, Tennessee, and his daughter Ella Michelle, Jeremy Evans of Monroe, North Carolina and his wife Jaime and their two daughters, Anabelle Ryn and Haizel Mae, her siblings and their children: Wayne and his wife Louise (“Weezie”) Burger of Denver, Colorado , a sister Janice and her husband, Mickey Goolsby of Adamsville, Alabama, Ben and his wife Sheila of Gulf Shores, Alabama, and Mike and Diane Evans of Birmingham, Alabama as well as several nieces and nephews. Charlotte was active in the Plainview church of Christ, working with her husband who is one of the elders. The Evans went on many foreign and domestic mission trips in addition to giving thousands of dollars to various mission works around the world. Charlotte was also involved in Henderson, Tennessee through her work with Freed-Hardeman University and the Civitan Service Club. A memorial service is scheduled for her at the Henderson church of Christ Chapel, May 11, 2022, at 11:00 a.m. with Wayne Burger officiating. Visitation will begin at 9:30 am. Shackelford Funeral Directors of Henderson 731-989-2421

The family of Charlotte Ann Evans of Henderson created this Life Tributes page to make it easy to share your memories.