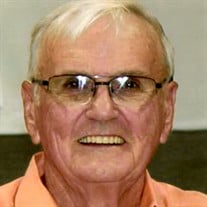 Dan Barnhill was born in Hardin County, Tennessee on September 1, 1937 the son of the Burnice William and Grace Christine Linam Barnhill. On December 21, 1957 he was united in marriage to Barbara Ann Morris, who survives. Dan grew up as a farmer, he later worked at Hardin County Co-Op. He served as a board member at the Hardin County Co-Op and at Hardin County Farm Bureau. Dan also owned 4 Star Appliance and later went to work for River City Concrete as a truck driver, where he retired from at the age of 80 years old. In his early years, he loved to bird hunt with his sons, and travel to the mountains. Dan also loved gardening, visiting friends, singing gospel songs, and attending church at Olivet Cumberland First Presbyterian. He lived to make everyone laugh and will be remembered for his endless jokes, games, and pranks. His greatest legacy will be his devotion and love to God, his wife, all his family, special friends, and co-workers. Dan departed this life on Tuesday, October 12, 2021 in Savannah, Tennessee at the age of 84 years, 1 month and 11 days. In addition to his wife of 63 years, Barbara of Savannah, Tennessee he is survived by his sons, Keith Barnhill and his wife Fay of Savannah, Tennessee, Doug Barnhill and his wife Bridget of Adamsville, Tennessee, and Chris Barnhill and his wife Teresa of Huntland, Tennessee; grandchildren, Amanda Terry and her husband Tim, Julie Orth and her husband Ryan, Sarah Franks and her husband Elliott, Andrew Barnhill and his wife Alex, Christina Cotner and her husband Casey, John Barnhill, Hunter Abrams, and Cody Sweat; great grandchildren, Carter Jackson, Gracie Jackson, Laney Franks, Abrams Franks, Camden Bonee, Landon Cotner, and Caegan Sweat; and sister, Suzanne Barnhill of Savannah, Tennessee. Dan was preceded in death by his parents and one brother, Jerry Barnhill.

Dan Barnhill was born in Hardin County, Tennessee on September 1, 1937 the son of the Burnice William and Grace Christine Linam Barnhill. On December 21, 1957 he was united in marriage to Barbara Ann Morris, who survives. Dan grew up as... View Obituary & Service Information

The family of Dan Barnhill created this Life Tributes page to make it easy to share your memories.

was born in Hardin County, Tennessee on September...

Send flowers to the Barnhill family.