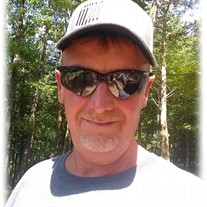 Daniel Wade Franks was born in Hardin County, Tennessee on April 1, 1973 the son of the late Gary and Mary Lou Smith Franks. Daniel lived all his life in Hardin County. He was self-employed working in carpentry, welding, and concrete work.... View Obituary & Service Information

The family of Daniel Wade Franks created this Life Tributes page to make it easy to share your memories.

was born in Hardin County, Tennessee on April...