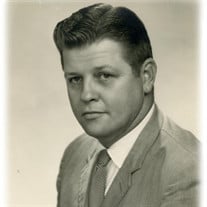 DONALD DEMING COLEMAN was born May 5, 1932, in Jackson, Tennessee to the late Gus Elmer and Virginia Deming Coleman. He grew up in a warm and loving home and graduated from Jackson Central High School in 1950, where he excelled in track and field and basketball. On September 6, 1952, he married Martha Sue Schaeffer of Capelville, Tennessee. Martha Sue was the great love of Don's life; they would remain married for nearly 68 years, until her death on August 20, 2017. God would give Don and Martha three children, Virginia Sue, Delayne Duke, and Donald Deming, Jr. ("Rusty"). Don served in the United States Army from 1953-1956, and was stationed in Munich, Germany, as a Sergeant Drill Instructor during the Korean Conflict. After his military service, Don and his family settled in the Memphis area, where he worked for Bluff City Buick as a salesmen and General Manager. In 1966, he opened a Volkswagen dealership in Dyersburg, Tennessee, which he operated for ten years. In 1972, Don and Martha both had a life-changing encounter with Jesus Christ, and the rest of their lives would be defined by their vibrant, personal relationship with him. They influenced countless individuals by their passion for the Lord, and many marriages were transformed by their counseling ministry. Don had fallen in love with Pickwick Lake as teenager, and whisked his family away there as often as he could during his career in the car business. In 1976, he and Martha realized their dream by making Pickwick Dam their permanent home. For the next forty years, they could be found walking briskly through Holiday Hills, working in their yard, swimming in North Winn Springs cove, and enjoying their houseboat. Aside from Martha's weekly Friday appointments at the beauty shop, they were rarely seen apart. Don and Martha also loved spending time with their children and grandchildren, and visiting with extended family in Memphis. Don departed this life on October 26, 2020, at Savannah Healthcare in Savannah, Tennessee, at the age of 88 years, 5 months and 20 days. In addition to his wife and parents, Don was preceded in death by his daughter, Delayne Duke Coleman. He is survived by two children, Donald Deming Coleman, Jr., of Counce, Tennessee, and Virginia Smith and husband Gene of Dyersburg, Tennessee; three grandchildren, Rebecca Cobo and husband Mario of Stewart, Florida, Eric Smith and wife Candace of Savannah, Tennessee, and Joseph Smith and wife Julie of Brooklyn, New York; and eight great-grandchildren, Erika Cobo, Isaac Cobo, Sofia Cobo, Jordan Cobo, Roman Cobo, Coleman Smith, Crockett Smith, and Clarabelle Smith.

DONALD DEMING COLEMAN was born May 5, 1932, in Jackson, Tennessee to the late Gus Elmer and Virginia Deming Coleman. He grew up in a warm and loving home and graduated from Jackson Central High School in 1950, where he excelled in track and... View Obituary & Service Information

The family of Donald Deming Coleman created this Life Tributes page to make it easy to share your memories.

Send flowers to the Coleman family.