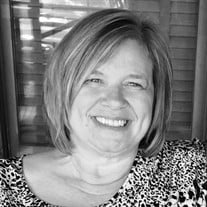 Donna Ann Lussier Donna Ann Maness Lussier, age 60, passed away Thursday afternoon at Jackson General Hospital. Donna Ann (Maness) Lussier was born in Lawton, Oklahoma on January 11, 1961 and was welcomed by her parents, William (Bill) and Mary Maness and her sister, Retta. Her brother, Billy, was born in 1962. When she was 5 years old, she moved to a house that became home until she married Daniel (Dan) Lussier in 1982. Donna was a homebody that provided for her family even from a young age. As a young girl, she loved going to church, riding bikes, and spending time outside. She was active in the Estes Church of Christ youth group in her teenage years. She was “Mom” to many before she even had any of her own, taking care of any child she had the opportunity to meet. She met Dan Lussier while buying things for her father in the Men’s Shop in downtown Henderson in 1979. She quickly fell in love with his humor and his love, and he fell in love with her smile and her dimples. They were married in the yard of what would be their home on May 15, 1982. They had their first son, Jonathan, in 1983 and their first daughter, Christi, in 1985. The Lussiers opened their loving home to dozens of foster children for about 10 years. During this time, Donna also worked at West Tennessee Children’s Home serving at-risk teens. Their biggest surprise and second daughter, Mary Emilee was born in 1998. Donna worked in the Chester County School System with Chelsey Baker from the time Chelsey was in the 2nd grade until her senior year of high school. Donna then began working from home teaching and taking care of children until her death. “Her” kids were very special to her, and she loved them as her own. In 2014, she and Dan opened their home to their great-nephew, Luke Maness. Donna was a wonderful daughter, sister, wife, Mother, Nonna, and friend. But most of all, she was a devout and faithful Christian. Her family surrounded her bedside at Jackson-Madison County General Hospital until she went to her eternal reward on September 9, 2021. She is survived by her husband, Dan; mother, Mary; brother, Billy; daughters, Christi (Shane) and Mary Emilee; sons, Jonathan (Mandi) and Luke; and five grandchildren, Evan, Milly, Jackson, Jase, and Maddie. She was preceded in death by her father, Bill Maness; sister, Retta Maness; and niece, LeAnn Maness. Funeral services will be 2:00 PM Monday at Estes Church of Christ with Billy Smith, Stephen Sells and Brian Beck officiating. Burial will follow at Old Estes Cemetery with Doug Burleson officiating. The family will receive friends from 10:00 AM until 2:00 PM service time Monday at Estes Church of Christ. Shackelford Funeral Directors of Henderson 989-2421

The family of Donna Lussier, of Henderson created this Life Tributes page to make it easy to share your memories.

Send flowers to the Lussier family.