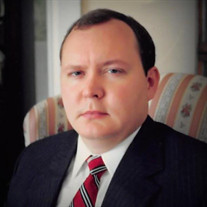 Howard Vincent Black, II, of Bolivar, passed away on Saturday, April 3, 2021 at Bolivar General Hospital. The husband of Cathy Morang Black, who survives, he worked as an investigator with the State of Tennessee Public Defenders office for several years and was with the Hardeman County Sheriff's Department prior to that. He was born Tuesday, March 20, 1962 in Jackson, son of the late Howard Vincent Black and Janet Boone Black and lived his whole life here. He had previously been heavily involved with the Boy Scouts of America, Troop 922. He was a 1980 graduate of Bolivar Central High School and graduated from the University of Tennessee at Martin with his undergraduate degree. He received his Master's in Criminal Justice from the University of Memphis. Mr. Black, or Howard, as everyone called him, was well known and loved, and active in the community. He was best known on Facebook to keep everyone aware of how many days were 'left' until Christmas and always had a snappy 'comeback' to whatever someone said to him, but in a loving manner. He served in the Army National Guard for 22 years and was a member of Middleton Church of Christ. In addition to his wife, whom he married on December 21, 1991, survivors include a daughter and son, who were his world, Hannah Black of Bolivar and Roy Vincent Black of Martin; a sister, Cynthia Black Hook (Errol) of Dyersburg; a niece, Amy Kimler (Chris) of Hendersonville; two nephews, Errol Michael Hook (Catherine) of Memphis and John Hook (Ashley) of Lexington, SC; and several great nieces and nephews. He was preceded in death by his parents. Memorial contributions in his name may be sent to the Middleton Church of Christ.

Howard Vincent Black, II, of Bolivar, passed away on Saturday, April 3, 2021 at Bolivar General Hospital. The husband of Cathy Morang Black, who survives, he worked as an investigator with the State of Tennessee Public Defenders office for... View Obituary & Service Information

The family of Howard Vincent Black II created this Life Tributes page to make it easy to share your memories.

Howard Vincent Black, II, of Bolivar, passed away on Saturday,...

Send flowers to the Black family.