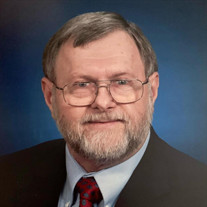 James Robinson was born October 9, 1943, in Memphis, TN, the son of the late Loyal Milton and Collis Letha Patterson Robinson. He is survived by his wife of 16 years, Brenda Jernigan Robinson. He was previously united in marriage to Betty Marshall Robinson, who preceded him in death on February 4, 2004, following 36 years of marriage. James graduated from Bethel Springs High School, where he served as basketball scorekeeper, and attended West Tennessee Business College in Jackson. He worked 33 years for Bellsouth, retiring as an Electronic Technician. James served his state and nation honorably as a member of the Tennessee Army National Guard and was called upon to help restore order in Memphis following the assassination of Dr. Martin Luther King, Jr. in 1968. Deer hunting, bream fishing, and riding motorcycles were among his favorite activities. He loved vintage cars and talking with others on his CB radio; his CB handle was "Batman." James also volunteered his time in support of the Bellsouth Phoney Town Clown Troupe, Camp Bluebird, and as a baseball umpire. He was a talented woodworker, crafting pens, keychains, shelves, chairs, and other pieces for family and friends. James loved his country and was very patriotic, flying the United States flag in his front yard and volunteering with the McNairy County Election Commission. He loved animals, especially his canine companion Coco, and would do whatever he could to help any animal in need. James was a former member of the Hardeman County Jaycees and a faithful member of the Fourth Street church of Christ in Selmer, where he formerly served as an Elder. James departed this life on September 11, 2021, in Corinth, Mississippi at the age of 77 Years, 11 Months, 2 Days. He is survived by his wife, Brenda Robinson of Selmer, TN; two daughters, Nancy Kelley and husband Tommy of Collierville, TN and Leigh Ann Hughes and husband Jerry of Franklin, TN; a son, Jason Bearden of Biloxi, MS; four grandchildren: Jesse Kelley and wife Brittany, Austin James Kelley, Brandon Scott, and Carlie Scott; a great-grandchild, Aurora Viola Scott; two brothers, Gary Robinson and wife Carol and Ralph Robinson and wife Gaylia, all of Selmer, TN; and many extended family and friends. Memorials may be made to the Fourth Street church of Christ at https://www.fourthstreetcoc.com/ or the McNairy County Humane Society at http://www.mcnairycohumanesociety.com/

James Robinson was born October 9, 1943, in Memphis, TN, the son of the late Loyal Milton and Collis Letha Patterson Robinson. He is survived by his wife of 16 years, Brenda Jernigan Robinson. He was previously united in marriage to Betty Marshall... View Obituary & Service Information

The family of James Robinson of Selmer, TN created this Life Tributes page to make it easy to share your memories.

Send flowers to the Robinson family.