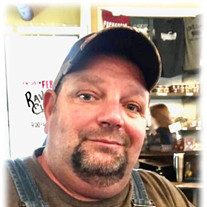 Mr. Jerry Wayne Franks was born April 17, 1968 in Savannah , TN to the union of Mary Ellen Dicus and the late Billy Gene Franks. Jerry Wayne as he was known by most began working in the family sawmill when he was only 8 years old. He continued to work at the sawmill until highschool when he became a dispatcher for the Wayne County Sherriff's Department. After high school, he began his career in construction, working for Shaub Construction in Nashville and then partnering with Ronald Burks and Randal Morrow to form BFM Construction. He continued his work in construction until he started on the right of way crew at TVEC in October 1991. After he was employed by TVEC he was sworn in as a IBEW Local Union 558 member, in which he was very proud. Jerry Wayne continued to work with TVEC and made his way up to being a lineman. June 15, 1990 he was united in marriage to Jennifer Brewer. Knowing Jerry Wayne, you would easily know his love for God. Possibly his favorite of all was when he was ordained in September 2018. He was a member and the Pastor at Ray's Chapel Baptist Church in Waynesboro. Jerry Wayne departed this life for his heavenly home on Monday January 18, 2021 in Columbia, Tennessee making his stay in this life some 52 Years, 9 Months and 1 Day. He is survived by his wife of 30 years Jennifer Brewer Franks; a son, Bradley Ray Franks; two daughters, Hannah Sellards (Conrad) and Heather Franks; a grandson that quickly became his pride and joy, Riggins Jase Sellards; his mother, Mary Ellen Dicus Franks, all of Waynesboro, TN. two sisters, Debbie Curtis (Jarvis) of Lawrenceburg, TN, Teresa Bell (Ricky) of Burns, TN. He is also survived by his father and mother-in-law Edward and Joyce Brewer, sister-in-law Regina Brewer all of Waynesboro, TN as well as several loving nieces and nephews and an abundance of friends that were like family. In addition to his father, Mr. Franks was preceded in death by his grandparents and a great niece, Haley Belew. Services will be held on Friday January 22, 2021 at 3:00 PM at Green River Baptist Church in Waynesboro, Tennessee, with Conrad Sellards, Jeff Davis and Mickey Brackin officiating. Burial will follow in the Memorial Gardens at Waynesboro, Tennessee. Active pallbearers will include: Patrick Bell, Christopher Staggs, Stan Bromley, Bronson Reaves, Sterling Walker, Jeff Duren, Ed Kilburn, Jarvis Curtis, Joey Horton and John Staggs. Honorary pallbearers will include the staff of TVEC in Waynesboro, Danny Walker, Chris Jackson, Kenny Smith and John Davis. In Lieu of flowers, donations may be made to the Butterfly Foundation or the Gideons. The family requires that everyone in attendance wear a mask and practice physical distancing. Shackelford Funeral Directors Assisting.

Mr. Jerry Wayne Franks was born April 17, 1968 in Savannah , TN to the union of Mary Ellen Dicus and the late Billy Gene Franks. Jerry Wayne as he was known by most began working in the family sawmill when he was only 8 years old. He continued... View Obituary & Service Information

The family of Jerry Wayne Franks created this Life Tributes page to make it easy to share your memories.