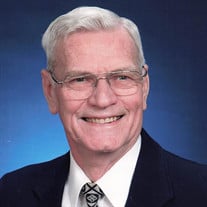 Jimmy McBride was born January 13, 1933 in Middleton, TN the son of the late William Leslie and Lizzie Ola Stewart McBride. He was united in marriage to Shirley Meeks on May 13, 1952. Mrs. McBride preceded him in death on January 7, 2009, following 56 years of marriage. Mr. McBride retired from Brown Shoe Company in Selmer following 22 years of service, then worked for Dover Elevator in Middleton for 19 years before retiring. During the Korean conflict he served his Country honorably in the United States Air Force for 4 years, attaining the rank of Airman First Class. Going on family vacations to east Tennessee each summer and fishing with Paul Scott were some of his favorite pastimes. He and his wife Shirley were loving and dedicated foster parents, having fostered more than 20 children. Mr. McBride was a faithful member of the Fourth Street church of Christ in Selmer, where he served as a Deacon and taught the Adult Bible Class for many years. Mr. McBride departed this life on February 20, 2021 in Selmer, Tennessee at the age of 88 Years, 1 Month, 7 Days. He is survived by five sons: David McBride and wife Sandy of Ramer, TN, Steve McBride and wife Jana of Selmer, TN, Randy McBride and wife Sherry of Selmer, TN, Charles McBride and wife Holly of Holly Springs, NC, and Jason McBride and wife Tammy of Selmer, TN; three daughters: Charlotte Mayfield and husband Coley of Ramer, TN, Sharon Vaughn of Jackson, TN, and Shelia Peters and husband Jesse of Bethel Springs, TN; 22 grandchildren; 5 great-grandchildren; two sisters, Pat Brumbelow of Pocahontas, TN and Naomi Berryman of Corinth, MS; and many extended family and friends. In addition to his wife and parents, Mr. McBride was preceded in death by two sisters, Juanita Garland and Hattie Stewart, and a brother, Gerald McBride. The family wishes to extend a heart-felt thank you to Mr. McBride's grandson, Evan McBride, for his loving and compassionate care during Mr. McBride's illness. Memorials may be made to the Alzheimer's Association at: https://www.alz.org/

Jimmy McBride was born January 13, 1933 in Middleton, TN the son of the late William Leslie and Lizzie Ola Stewart McBride. He was united in marriage to Shirley Meeks on May 13, 1952. Mrs. McBride preceded him in death on January 7, 2009, following... View Obituary & Service Information

The family of Jimmy McBride of Selmer, TN created this Life Tributes page to make it easy to share your memories.

Send flowers to the McBride family.